SouthPeak Games' The Con - Well Worth A Wager

Unique fighting action enters the ring in March, complete with improvements on US version. 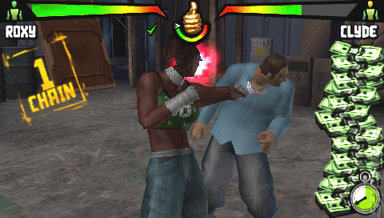 Thursday 15th February/...The Sony PSP® will find itself endowed with an entirely new and unique take on the fighting game genre in early March 2007. The Con was previously released in the US, but SouthPeak Games have confirmed that the version that reaches UK shores will come with a set of enhancements based on user feedback.

Developed in Japan by Think And Feel Inc, The Con tells the story of a fighter indebted to an influential organiser of illegal street fights. Obviously, the game?s objective is to make money through fighting, but all is not as it seems and not all fights are created equal.

In some clashes, the player will have to take their fair share of tactical losses as well as striving for pugilistic victory. This skewing of priorities is supported by a betting system that allows the player to gamble on either side winning each fight. This opens up new avenues for generating cash via subterfuge and feint as well as guile and technique, where making money may be more important than winning with honour.

The Con?s versatile fighting engine opens up tactical possibilities never seen before in a fighting game. Punches can be faked, guards can be deliberately lowered and dives to the floor can be initiated, making The Con the only game where losing a fight can benefit the player more than winning ? provided it?s done convincingly. If the crowd don?t buy your performance, you?ll lose your winnings. Fights aren?t strictly a one-on-one affair, either. Battles can involve up to three fighters on each side.

The Con also provides a remarkable amount of player customisation. The player?s team of three characters can be moulded with an exemplary range of appearance-altering options. Physique, clothing and accessories are all up for modification and the ability to import photographs allows for an infinite number of player faces ? familiar, famous or otherwise.

Also part of The Con?s complex package is the multiplayer mode, which takes a traditional route of providing one-on-one matches. Single-UMD game sharing is included, but players with two copies of The Con get the added benefit of being able to place unlocked items as a stake in their victory.

As part of the enhancements introduced for the European release of The Con, players will find loading times have been shortened and tweaks have been made to the overall difficulty level.

This refined version of The Con will be released for the Sony PSP® on March 2nd.
Companies: South Peak
Games: The Con