New Features and Support Announced for the PAL Release of ArmA: Armed Assault 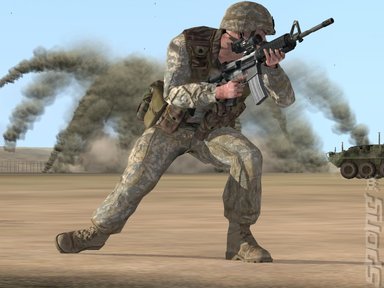 Publisher 505 Games is today delighted to announce that the forthcoming military combat simulator ArmA: Armed Assault will be supported during its February launch period by additional content and features.

February 16th marks the launch of the world?s most accurate videogame combat simulation in the UK and the rest of Europe(1). ArmA: Armed Assault has already been dazzling UK reviewers pre-launch, for instance scoring a massive 84 per cent and being awarded a Silver ?Recommended? medal of honour in the March issue of Future Publishing?s PC Zone magazine.

ArmA: Armed Assault will feature additional content not present in the German and Eastern European versions already on sale. This exclusive content includes a raft of new weapons, two new aircraft and two motorbikes, as well as an exclusive new open-ended mission. 505 Games is also pleased to announce that SecuROM copy protection has been perfectly implemented and integrated into ArmA, with zero slow down or adverse performance effects.

To further bolster the appeal and playability of this unique war simulation, the game?s developer - Bohemia Interactive - will release a new game patch for the German and Eastern European versions before the end of February. The patch ensures an internationally unified playing environment for all users.