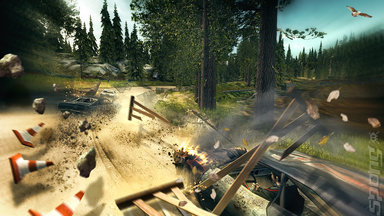 The sales of the critically acclaimed FlatOut 2 franchise have surpassed one million copies worldwide since its release in June 2006. FlatOut 2 has also won numerous awards including on Xbox® ‘Best Racing Game of 2006’ from G4’s X-Play games show (beating off the likes of Need For Speed Carbon and Test Drive Unlimited in the process), ‘Best PlayStation 2 Racing Game of 2006’ from IGN and on PC “Best Racing game of 2006” from Krawall Gaming Network.

Developed by Bugbear Entertainment, FlatOut Ultimate Carnage is rebuilt from the ground up and specifically developed to take advantage of the additional feature sets and improved processing ability of the Xbox 360 to produce an entirely new, breathtaking FlatOut experience.

Some of the many brand new design and gameplay components featured in FlatOut Ultimate Carnage include 12 cars racing on screen up from eight in FlatOut 2, five all-new single player and two all-new multiplayer game modes over the Xbox Live® online game service, over 8,000 dynamic objects per track up from 5,000 in FlatOut 2, widescreen High Definition resolution (720p), dynamic lighting and shadowing all with proper real-time environment mapping on all vehicles, downloadable content via Xbox Live, and 20,000 polygons per car up from 7,500 in the previous generation.

Commenting on the next generation debut of the FlatOut franchise, Ian Higgins, CEO of Empire Interactive remarked, “The announcement of FlatOut Ultimate Carnage on Xbox 360 is the first since the acquisition of Empire Interactive by Silverstar, and will be followed by many other exciting announcements from the company throughout 2007. The FlatOut franchise has been incredibly successful to date with the first two games in the series both selling over one million copies around the world, so we are very excited in being able to reward the loyal FlatOut fan base with a next generation FlatOut game. FlatOut Ultimate Carnage is that game and it is undoubtedly the best FlatOut game to date.”

Clive Kabatznik, CEO of Silverstar Holdings, stated “FlatOut is the flagship franchise of our group. The tremendous public response to the title and the numerous industry awards are testimony to the quality and popularity of this game franchise. We believe that this bodes well for the upcoming release of FlatOut Ultimate Carnage on Xbox 360, both in terms of the new capabilities showcased by third generation console technology as well as increased popular appeal for the latest incarnation of this most successful franchise.”

Xbox, Xbox 360, and Xbox Live are either registered trademarks or trademarks of Microsoft Corporation in the United States and/or other countries. All other trademarks are the property of their respective owners.
Companies: Bugbear Empire Interactive
People: Clive Kabatznik Ian Higgins
Games: FlatOut Ultimate Carnage