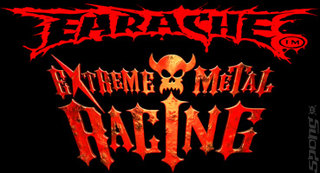 The time has finally come for you to strap yourself into the driving seat for the release of the world?s first exclusively Death Metal and Grindcore themed PS2 game. ?Earache Extreme Metal Racing? will finally hit the shelves on Friday February 2nd 2007.

This groundbreaking PlayStation 2 Game features an in-game Mp3 player to access 3 hours of exclusively Earache extreme metal music including unreleased tracks, plus over an hour of video clips, including several exclusive never-before-seen clips, which are accessed during the higher levels of the game. Exhilarating gameplay plus music from the likes of Napalm Death, At The Gates, Cathedral, The Haunted, Hate Eternal, Ultraviolence, Cult Of Luna, Beecher, Urkraft, Anata, Mistress, Severe Torture and many others makes this an essential purchase for Earache fans.

Gamers can choose from 10 evil Earache racing teams including Deicide, Morbid Angel, The Berzerker, Akercocke and Municipal Waste to burn rubber around an assortment of ghoulish racetracks as well as the pulverising Deathmatch Arena, while mercilessly mowing down zombies and mutilating the opposing teams' vehicles with an assortment of weapons. Unbridled brutality scores you ever-higher Skull tokens, thus enabling you to open more unlocked portions of the game, further racetracks and yet more unseen clips by the Earache bands.

All in all ?Earache Extreme Metal Racing? puts the world of gaming head-to-head with the explosive world of Extreme Metal and serves up an un-missable gaming experience.