Build YOUR Nation YOUR way! 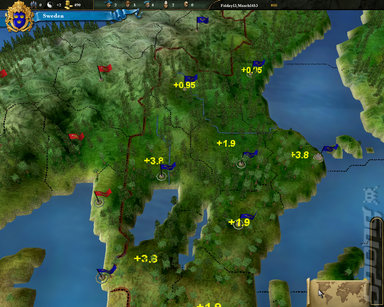 New York, USA (Nov 8, 2006) - Paradox Interactive is not only known for the depth and scope of their games but also for games that have had quite a steep learning curve. Drawing from experience of developing more than 16 games, in Europa Universalis III the team has focused on creating an interface that is intuitive and easier to get into while still staying true to the core and keeping game play intelligent.

In addition, the player is offered an almost endless number of choices, gameplay variations and outcomes thanks to its open-ended gameplay. The team has also taken into account that some gamers want to control their nations in every aspect while some are content to keep a more macro overview and focus on the bigger strategic decisions.

One example of such a feature is the "Flexible nation building", where players can build province improvements with an overall view rather than focusing on individual provinces. Each nation will have an option to alter either of the following on a country level, which in turn affects the gameplay:

The Court: By recruiting famous historical personalities like Mozart, Descartes and Copernicus as advisors to your court, players will gain different bonuses and skills in administration, diplomacy and military.

Economy: Sliders will let you affect exactly what investments you make in different areas and let you control how to spend your monthly income. Each decision will affect the other posts like your stability, your production and trade.

Troops: Players choose different type of troops (Infantry, Cavalry, Artillery) and will also have the opportunity to choose "national flavors" like Gaelic Free Shooters or Caroleans. All choices bring different skills and traits to the table.

Religion: Shows your tolerance towards other religions and players can convert to other religions in the same group. The more tolerant you are towards a religion makes you equally intolerant to another. An interesting detail is that you can claim to be the sole defender of the faith; giving players sought after bonuses but also added risk.

Government: Illustrates the national ideas chosen and acquired by the country. With the domestic sliders, players will be able to determine what type of society they want to govern, for instance a democratic or autocratic, a very innovative or extremely narrow minded etc.

The Flexible nation building, along features like alert systems, increased control over sliders and more will give players the opportunity to customize their own game, while other players will choose to sit back and conjure up strategies to conquer the world.