Warfare On An Unprecedented Scale 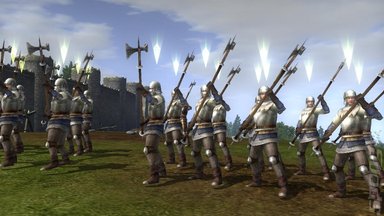 Bladestorm: The Hundred Years War puts gamers in the role of a rogue commander and gives them direct control of mercenary units in fierce clashes with English and French forces.

The game’s unique style of action thrusts players into dynamic and ever-changing conflicts. Players must adjust their strategies as skirmishes evolve, and then deploy the unit best-suited to handle the challenge. At a player’s command is a broad array of troops including infantry, archers, and cavalry, as well as a variety of specialized units such as elephant units, cannoniers, and castle siege specialists. While each unit is comprised of autonomous soldiers, each warrior will contribute to the assigned objective.

Bladestorm: The Hundred Years War utilizes a “Free Mission” system that allows players to align their forces with either the French or English on a battle-by-battle basis. This unparalleled freedom allows players to take on different assignments, or simply experience a given battle from an opposing side.

Game progression is wholly dependent on a player’s decisions and accomplishments on the battlefield. Players must establish a reputation as a dependable and capable leader by successfully completing each mission. The reputable commander will attract more desirable troops to his employ, and will be asked to take on weightier challenges that reflect his status as a fighter and leader of men. The troops themselves will also become more lethal as they gain combat experience. Through a point system, players can augment their units’ combat capabilities.