Cyan Worlds' MystTM takes to the streets for the first time on the PlayStation®Portable. 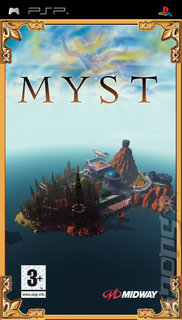 The timeless adventuring masterpiece from Cyan Worlds and Hoplite Research, LLC has intrigued and delighted gamers for over a decade on home consoles and computers, but today it debuts on a handheld videogame format for the first time. The game takes advantage of the PSP’s glorious 16-million colour 16:9 screen as it catapults the player into a universe of mystery, discovery, and mind-bending puzzles.

Utterly alone and without encountering another single living soul on a mysterious island, the player sets out to explore its grandeur and unlock its secrets. A chilling tale of injustice unfolds, expanding beyond all boundaries of space and time. Quickly, though, it becomes clear every action can somehow help unfortunate individuals trapped somewhere in a parallel dimension. The Myst adventure is like no other, tantalizing with its unique combination of lavish environments, puzzles, mazes, and a sizzling underlying drama which steadily reveals itself to the player.

“We are delighted to present one of the world’s most successful game franchises to Sony’s PSP,” said Martin Spiess, Managing Director - Europe of Midway Games Limited. “The highly-anticipated handheld version of the game includes all the production values and excitement that have made this title a timeless classic."

Manny J. Granillo, President & Chief Designer of Hoplite Research, LLC, stated, "Finding the right partner with the right vision and who is in touch with what gamers want is always a challenge. We are delighted that we can work with such a strong publisher as Midway."
Companies: Cyan Worlds Midway
People: Martin Spiess
Games: Myst