Friday 13th a bad luck day or just another shitty day, that's for you to decide! 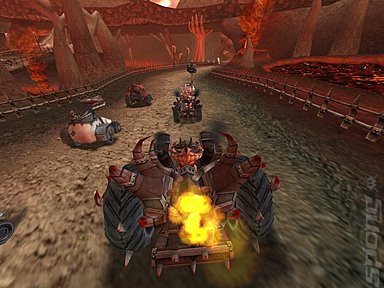 Or you could connect you joypad to the PC and take a drive in the world of the dead and dieing, that is in the 2nd Earache Extreme Metal Racing demo...

Stourbridge, England Friday 13th 666, Metro 3D Publishing would like to announce the release of a second demo for their Earache Extreme Metal Racing game which is due to ship on 3rd November 2006.

The featured level drops you deep in the bowels of hell for a race amongst a devilish backdrop of devils caverns. Your opponents are demons who are hell-bent on making sure you don?t reach the pole position; they will attack you with blood soaked spinning blades and hammers of the gods, whilst one foe even uses the ?beast tongue? to whip you into shape!

The level will also be populated with the fearsome living dead who carry either the plague of death or the special acceleration boost, so don?t be shy and go in for the kill!

Earache Extreme Metal Racing uniquely was conceived and created by 15 year old Gothic metaller Sky Nash and all started as a possible way to not only keep her amused but potentially to dissuade her from following her overworked father into a gaming career.

Earache Extreme Metal Racing is a joint partnership between Earache Records with Metro 3D, a leading Value Price video games publisher, in conjunction with the games developer Data Design Interactive, shipping on 7th July 2006 for PlayStation2, and PC and Q4 on PSP.

Earache Extreme Metal Racing will feature ten evil Earache racing teams burning a lot more than rubber through hell and other wastelands. Along with themed tracks from the combatants on the starting grid there?ll also be a plethora of extreme Earache classics making up the soundtrack of the game from such luminaries as Napalm Death, At The Gates, Cathedral, The Haunted, Hate Eternal, Cult Of Luna, Beecher, Urkraft, Anata, Mistress, Severe Torture and many others.