Slated for 2007 and developed by Irrational Games, BioShock will forever change the expectations for the first-person shooter. 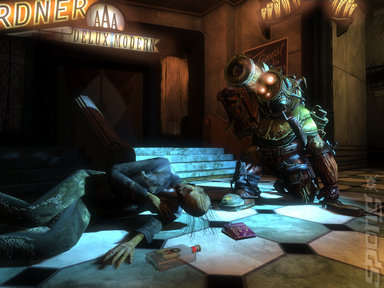 "2K is excited to release BioShock exclusively on Xbox 360 and under the Games for Windows brand on the PC," said Christoph Hartmann, President, 2K. "BioShock is the next step in the evolution of first-person shooters and a perfect title to push the limits of Xbox 360."

"We expect BioShock will set a new mark in next generation gaming when it launches next year," said George Peckham, general manager, global third party publishing for the Interactive Entertainment Business, Microsoft. "We're thrilled that gamers will be able to experience BioShock only as an Xbox 360 and Games for Windows title."

The Games for Windows branding ensures that consumers have a consistent, reliable gaming experience on Windows XP and Windows Vista with easier game installation, improved reliability, and support for key Windows Vista features. These titles will also support wide-screen gaming, can be launched from within Windows Media Center, will be compatible with 64 bit consumer versions of Windows and support the Xbox 360 Controller for Windows.

Taking full advantage of both Microsoft platforms, BioShock takes place among the ruins of an underwater utopia. After your plane crashes into icy, uncharted waters, you discover a rusted bathysphere and descend into Rapture, a city hidden beneath the sea. Constructed as an ideal society for a hand-picked group of scientists, artists and industrialists, Rapture collapsed under the weight of its own idealism. Now the city is littered with corpses, wildly powerful guardians roam the corridors, mutated little girls scavenge the dead, and genetically modified citizens ambush you at every turn.