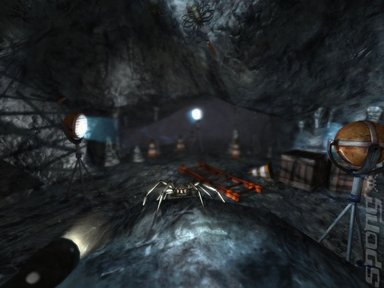 Developed by Swedish developer Frictional Games, Penumbra: Overture is an enthralling first person action adventure using an advanced and internally developed real-time 3D engine which conveys player freedom and immersion aiding an already captivating storyline where the player has to use his/her wits to guide the protagonist on his quest to unravel the past.

The first episode takes place in an underground facility on Greenland where the player finds himself alone, confused and with no way to get out. Something is wrong… where is everyone, and what are those strange noises?

It has been two weeks since Philip's mother died when he receives a letter from his late father, whom he never met, telling him to retrieve a book in a safe-deposit box and burn it. Intrigued he ignores the request and studies the book intensely, discovering clues that points to a place in Greenland and after much thought Philip decides to go there. Arriving in Greenland and certainly unprepared he almost instantly gets lost in a blizzard. Nearing exhaustion and frantic as hypothermia starts to wash over his body he stumbles upon a strange metal hatch. Convinced this hatch is what he is looking for, Philip enters. As he descends into the depths of the unknown, what started out as a quest for the past turns into a struggle for survival.

Penumbra: Overture offers intuitive and challenging gameplay using immersive mouse movement interaction. This allows the player to open, pull, push and in other ways manipulate the game objects in a motion similar to doing it in real life. This type of interaction has never before been used in a game and makes the puzzles a lot more fun and the game more immersive.

You are on your own, except for some dangerous creatures and will survive and succeed on your guile. There will not be any direct character conversations and you learn about what is going on through radio transmissions, notes, and books and by examining the environment.

Penumbra: Overture is not about mindless violence, although there will be occasions when you will have to face a number of truly horrifying and unpleasant creatures and combat is implemented in such a way that an enemy is very hard to kill. Trying to use a weapon is really a last resort. At best the player will manage to knock the enemy out for a short time period allowing her/him to escape and hide. Various objects in the environment will also be useful for stopping enemies. Rocks can be thrown and heavy boxes can be pushed over enemies. There are also inventive actions like being able to break a beam and thereby letting large rocks fall onto an enemy. These are just a few measures you may have to undertake to get out of a dangerous encounter.

Features of the game include:

Penumbra: Overture uses an in-house developed 3D engine, featuring next-gen technologies such as motion-blur and depth of field. It is also packed with the standards of today: normal mapping, bloom, specular and dynamic shadows and lightning. Using the Newton Game Dynamics physics engine, Penumbra brings you some of the best physics found in a game to date, not only do they function as eye-candy, physics is heavily integrated into the interaction mechanisms and audio systems.

Penumbra: Overture will keep players on the edge as they have to explore scary and immersive environments never knowing what is behind the next corner. With a highly detailed world, as well as a story that will intrigue, making the player feel part of the world as secrets are uncovered. Fans of this genre will find it hard to put down!

An emotionally charged experience that will continue on through three episodic releases that will have you coming back for more...