Piggyback Squares Up For Another Lavish Guide 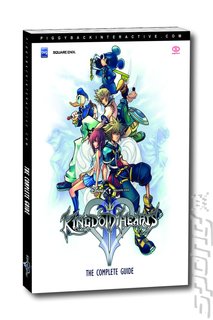 Piggyback has unveiled the latest in its portfolio of lavish, detailed and 100 per cent complete guides.

Published by Square Enix in Europe, Kingdom Hearts II is the follow-up to 2002?s smash RPG adventure, which included Square Enix characters and Disney icons, resulting in a game as memorable as it was popular.

Kingdom Hearts II picks up where the original left off ? and, if its success in Japan and America is anything to go by, the game looks set to dominate the hearts and minds of gamers everywhere. Kingdom Hearts II sold over one million copies during its first month of sale in North America alone.

Piggyback has secured the rights to publish the game?s official guide throughout the PAL territories. It is available from today, the same date as the game, in English, French, Italian, German and Spanish and priced at Ł11.95 in the UK.

?Kingdom Hearts II is a massive game which demands a 100 per cent complete guide,? says Louie Beatty, managing director of Piggyback. ?The game?s popularity and depth should make this one our most popular publications to date.?

Jonathan Symington, a Director of the Disney Global Book Group added: ?The trade and public have been waiting a long, long time to play Kingdom Hearts II and anticipation for the official companion guide has been equally high in the PAL territories. Piggyback has delivered a guide of immense depth and quality, while making it accessible to players of all levels.?