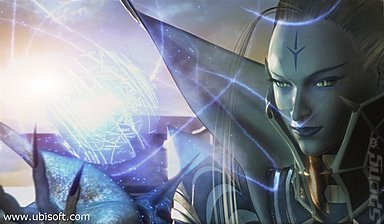 LONDON - 31st August, 2006 - Today Ubisoft, one of the world's largest video game publishers, announced that Enchanted Arms? has shipped exclusively for the Xbox 360? video game and entertainment system from Microsoft, and will be available on store shelves next week. Enchanted Arms was created by development studio FromSoftware in Japan and is the first true next-generation Japanese role-playing game (RPG). The adventure takes place in a fantasy world filled with beautiful cinematic graphics and vibrant characters. It includes over 50 hours of gameplay and is the only Xbox 360 RPG with the fast-action SpeedTactics Battle System, which enables the player to move their characters and use distance-dependent attacks while in battle.

In Enchanted Arms, players will embark on an epic adventure filled with unique characters and more than 100 special controllable creatures that players can unlock as they progress. Players will take on the role of Atsuma, an Enchanter-in-training who will transform from a naďve student to the most powerful savior in a war 1,000 years in the making. As the story develops, players face increasingly difficult challenges, meet new allies and learn to master Atsuma's special fighting and magical abilities.