Ubisoft Unveils Star Wars: Lethal Alliance? ? The Fate of the Galaxy is in Your Hands 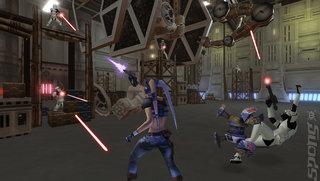 Star Wars: Lethal Alliance is the first original Star Wars game built exclusively for the PSP system and DS, immersing players in an adventure that takes place between Episode III Revenge of the Sith and Episode IV A New Hope. Gamers will engage in collaborative gameplay as they embody both Twi?lek Rianna Saren and her security droid Zeeo. Hired by the Rebel Alliance, this deadly duo must work together to infiltrate Imperial planets and fight legions of evil fiends. Our heroes' ultimate goal: Uncover the Empire?s most deadly secret ? the Death Star.

?Ubisoft is honored to announce this exciting and innovative Star Wars game, the first original game in the legendary franchise built to take full advantage of the unique capabilities of both the PSP system and the DS,? said Serge Hascoet, chief creative officer at Ubisoft. ?We have worked closely with LucasArts to create a game that further develops the Star Wars universe, and unveils some of the mysteries that have kept millions of fans enthralled for decades.?