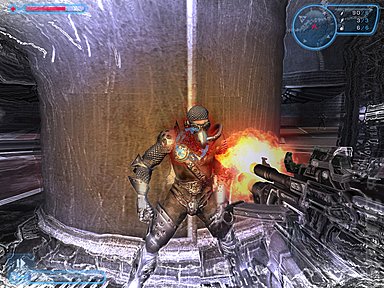 All Images (3) »
READING, UK - (July 27, 2006) - Vivendi Games' Sierra Entertainment today announced that it has secured top Hollywood talent to provide voices for the characters featured in the video game TimeShift?, scheduled to release for the Xbox 360? gaming and entertainment system and PC this September. Dennis Quaid, Nick Chinlund and Michael Ironside will add their voice to the original first-person shooter videogame offering unprecedented time-control technology that allows players to stop, slow and reverse time in order to overcome difficult scenarios or defeat challenging enemies.

"TimeShift has been previously acclaimed for its time manipulation game dynamic, yet we still were looking at ways to increase the overall entertainment take-away for players. The inclusion of Hollywood voice actors was one way to do just this," commented Cindy Cook, Chief Strategy and Marketing Officer for Vivendi Games. "By casting recognisable Hollywood actors to voice the main characters, we're providing audiences with an audio touchstone that gives the game a greater level of authenticity and, ultimately, quality."

Lending his distinctive voice talent to TimeShift's lead character, Colonel Michael Swift, is Dennis Quaid, the renowned actor who has starred in such blockbuster films as Enemy Mine, Frequency, Inner Space, Far From Heaven and Traffic. Nick Chinlund, who is best known for his performances in Con Air, Training Day and The Chronicles of Riddick films, will voice General Mitchell - the military overseer for Project TimeShift. Michael Ironside, famous for his many television roles on hits like ER and Desperate Housewives and for his many films such as The Perfect Storm, Total Recall, Starship Troopers and Top Gun, will be the voice of scientist Professor Krone.

Marked by an epic, time-traveling narrative and cutting edge in-game physics, TimeShift introduces a never-before-seen approach in the genre by challenging players to manipulate time to bring down a totalitarian regime.

In the game, players assume the role of recently retired test pilot Colonel Michael Swift, a man haunted by the tragic loss of his daughter. Driven to escape his misery, Swift accepts a unique offer from the US Government to test an experimental set of time-control devices and become the world's first 'chrononaut.' During the tests, he inadvertently alters the timeline and returns to a present changed beyond recognition. The democracy he left has become a fascist nightmare - and his knowledge of his time travel saga has made him an enemy of the state. Armed with the time-shifting Quantum Suit, Swift is now in the deadly race to fix the past, present and future.