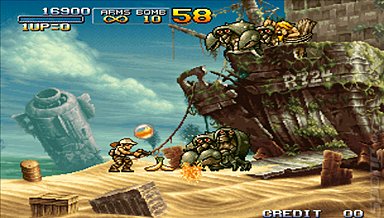 Metal Slug Anthology
Following the recent high profile announcements of Mercury Meltdown and Blade Dancer, both for the PSP™ (PlayStation® Portable), Ignition Entertainment is pleased to confirm the extension to the exclusive Publishing Deal that will ensure that SNK Playmore titles will continue to enjoy a dedicated European release.

'We are delighted to have signed the next wave of SNK releases for Europe' Vijay Chadha, Managing Director, Ignition Entertainment, 'SNK have a very strong line-up and an even stronger following. The SNK titles have proven to be extremely popular, and have shipped close to one million units, we are confident that we can build upon this success'

'We are really pleased with Ignition's professionalism, and the support they have shown over the last 2 years' says Shinya Morishita, Overseas Marketing manager, SNK Playmore 'we are delighted to renew our agreement for our new titles."