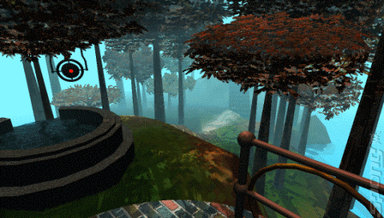 All Images (3) »
London – June 08th , 2006 - Midway Games Ltd., a subsidiary of Midway Games Inc. (NYSE: MWY), today announced a European publishing agreement (excluding South Africa, Australia and New Zealand) for Myst™ on PSP, the latest version of the epic adventure from Cyan Worlds. Over a decade since PC adventurers first sampled the delights of Myst’s emotive and visual feasts, the new handheld development will engage the player like never before and literally take them to another world.

There are no instructions and the player begins a voyage of exploration without encountering a single living soul. Alone on a mysterious island, you set out to explore its grandeur and mystery. Here a chilling tale of intrigue and injustice, defying all boundaries of space and time, is being told. Quickly, though, it becomes clear every action can somehow help unfortunate individuals trapped somewhere in a parallel dimension. The Myst adventure is like no other, tantalizing with its unique combination of lavish environments, puzzles, mazes, and a sizzling underlying drama which steadily unfolds to reward the player further still. More details about the game and release information will be made available shortly.

Martin Spiess, Managing Director - Europe of Midway Games Limited, offered, “We’re thrilled to be bringing one of the best known and most successful game franchises to this handheld format for the first time. Myst promises a one-of-a-kind adventure experience and contribute to the broadening of our PSP portfolio.”

Manny J. Granillo, President & Chief Designer of Hoplite Research, LLC, stated, "Finding the right partner with the right vision and who is in touch with what gamers want is always a challenge. We are delighted that we can work with such a strong publisher as Midway."
Companies: Cyan Worlds Midway
People: Martin Spiess
Games: Myst