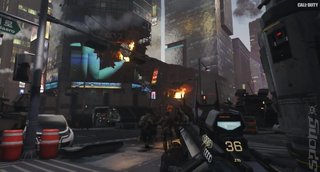 Activision showed off the Induction" campaign level of Call of Duty Advanced Warfare at E3 yesterday, which follows a group of US Marines as they drop into the battle lines of Seoul, South Korea.

Now, this may seem like a good idea until it dawns on you that South Korea is actually on our side. Admittedly, geography outside of the USA is probably not top of the agenda for Team America World Police. Watch the video anyway.