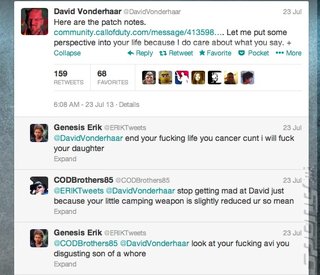 Yep, that's right: a death threat. Black Ops II received a patch yesterday for the Xbox 360 which triggered the kind of OTT reaction that just walks straight up to the Daily Mail and begs to be reprinted.

The patch notes consisted of general issue-fixes and a few new features, but the part that riled the gamers enough to make them violent is as follows:

... Weapon balancing, that's what's caused the developer, Mr. David Vonderhaar to receive the abuse that you can see in the image illustrating this story. No wonder the papers and news think of gamers as immature nerds. Threatening the guys who build your games? What's that about?