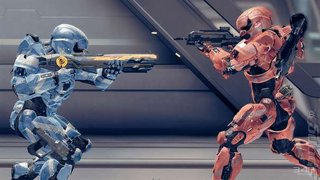 Who says gaming gets you nowhere? 343 Industries, Xbox 360 and Virgin Gaming are teaming up again to launch the ?Halo 4? Global Championship. Battle against other gamers around the world for a chance to win your share of $500,000 including a grand prize of $200,000.

There are two ways to enter; you can either play as part of an online competition on Xbox Live by registering through Virgin gaming at www.halo4globalchampionship.com and then competing in a minimum of 20 matches each week. If you're good enough to come out with one of the top four average scores, you'll be eligible to play in the finals for your chance to win.

The second way to enter is by participating in live competitions at the Rooster Teeth Expo in Austin, TX from 5th to 7th July, and Gamescom in Cologne, Germany from 21st to 25th Aug.

Six finalists from each of the live events and 20 from the online qualifiers will receive an expenses paid trip to participate in the Finals in Seattle, Washington.
Companies: 343 Industries
Games: Halo 4