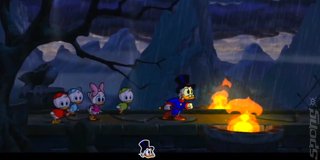 DuckTales is still an amazing game. And Capcom is working with WayForward to remaster the entire thing in high-definition, in quite possibly the best news this entire console generation has ever witnessed. Gameplay videos have surfaced which offer an insight into just how faithful the updated version is to the NES original.

The two gameplay videos of DuckTales Remastered, courtesy of IGN, showcase the Amazon level in a side-by-side comparison with the NES game, and clips from the Transylvania stage.

As you can see, there's additional bonus goodies to pick up, some areas have been made slightly easier (NES games were purposely made to be unforgivingly difficult, you know) and there's absolutely delightful dialogue featuring the original cast of the DuckTales cartoon show. Of course, it's understood that you can skip or remove the additional fluff if you want to keep your experience pure.

The game will be releasing on PC, Wii U, PS3 and Xbox 360 via digital download this summer, and will include additional content such as a brand new end stage on Mount Vesuvius. Give the videos a watch below.