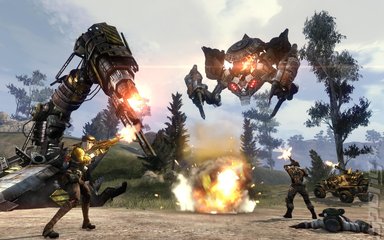 Trion World's console MMO Defiance will be seeing a European distribution, thanks to a new partnership that's been struck with Namco Bandai.

Namco Bandai will be responsible for distributing the game in Europe, Middle-East, South Africa, Australia and New Zealand for the PS3, Xbox 360 and PC in April 2013.

The game will launch with a TV series on Syfy, which will help to create a deep and expansive universe. Events from the MMO will affect those taking place in the TV show, and vice versa.
Companies: Namco Bandai Trion Worlds
Games: Defiance