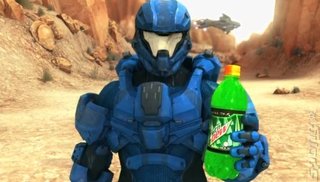 In case you've not caught up with the ongoing controversy featuring Eurogamer, its former columnist Robert Florence, trade mag MCV, its mostly PR-judged awards for good work by the games media in the UK, and its staffer and sometime SPOnG contributor, Lauren Wainwright, (well... see the detail of that a bit later) the whole thing began with a dig at dead-eyed video games talking head, Geoff Keighley.

Geoff, as is the way with commerce whether we like to admit it or not, was happily sat surrounded by PepsiCo product, that was being used by the Coke-rival to leverage whatever cool-youthdom it perceives as existing in the dear old Halo brand. Yes, indeedy, Keighley, was shilling for both Pepsico and Halo 4 in a way that made many people shocked at how such an upstanding journalist as GK could muzz the lines between commerce and art.

Rab Florence deal with the issue with righteous fury in a pithy article entitled, 'Lost Humanity 18: A Table of Doritos'. But that fury was cut short as his piece was edited at the request of MCV publisher, Intent Media, in defence of its staffer (and sometime SPOnG writer) Ms Wainwright who was named in the article that went on to talk of ethics, tweeting, awards ceremonies run for PR purposes and competitions. Or it was edited at the request of Ms W's legal advisors depending on the 'fact' that you side with.

We'd recommend catching up over at John Walker's blog where Rab Florence has posted a guest column. Or you can have a look at Forbes coverage of the fiasco to get a view from the USA. We'll be opining a bit later today or tomorrow in a calm of settled dust.

In the meantime, watch this perfectly legal piece of detritus and let's talk about how old and intelligent mainstream advertisers think gamers are.

wow 30 Oct 2012 17:00
2/3
this made less sense than my sisters organic chemistry textbook when i read it when I was in elementary.

Education 30 Oct 2012 17:38
3/3
This article is why we need better English as a Second Language teachers.
Posting of new comments is now locked for this page.