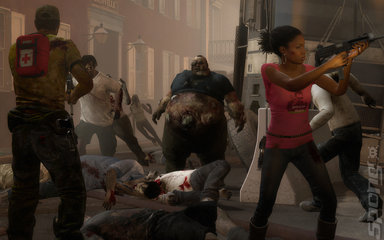 Xbox 360 Left 4 Dead 2 players can now relax - Valve is, at last, ready to talk about the release of the Cold Stream expansion pack which launched on PC and Mac last week.

The studio made a formal announcement on the game's official Twitter page, stating that "We are set for the tittle [sic] update and the Cold Stream DLC to be released this Friday." It was previously announced that the DLC will cost 560 Microsoft Points.

As well as a new Left 4 Dead 2 chapter, Cold Stream also brings all four of the original Left 4 Dead chapters to the game - Crash Course, Death Toll, Dead Air and Blood Harvest can now be played with the cast of L4D2 on Friday. Enjoy!
Companies: Valve
Games: Left 4 Dead 2