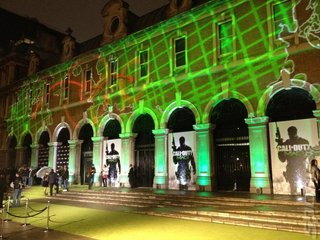 All Images (7) »
Modern Warfare 3 launched in London last night and thankfully no innocent bystanders were blown up by terrorists. Our man DrDee went along and had a few things to say in between supping booze and eating chicken.

Gems such as, "A man called Joey Barton is shooting footballers from around Europe!" were the order of the day.