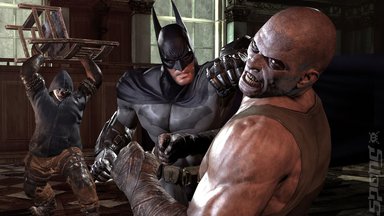 If you thought you'd be gunning it around Arkham City in the Batmobile by the time Batman's latest adventure game arrives, you should probably think again. The Dark Knight won't be able to use vehicles of any kind in Rocksteady's upcoming sequel.

No, not even that crappy Batsub thing that was in Batman & Robin.

Rocksteady's Sefton Hill told GamesTM that "There aren't any playable vehicles in the game. What we've really focused on is Batman himself. We see him as the ultimate vehicle." If that's not a contender for Corniest Line of the Year, we don't know what is.

Still, that doesn't mean to say the vehicles won't make an appearance at all. Batman: Arkham Asylum featured the Batmobile and Batwing during some awesome cutscenes, so maybe we'll still be able to get our fix in Arkham City this way.
Companies: Rocksteady
Games: Batman: Arkham City