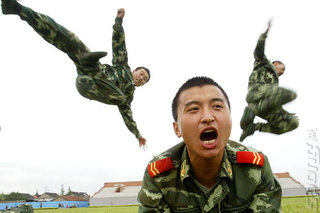 A day in China.
Kinect will not launch in China, announced Michel Van Der Bel, COO of Microsoft (China) Co., Ltd. What a surprise.

The news should come as a no-brainer, given that in 2000 the country's Ministry of Culture formally banned the production and sale of video games, consoles and accessories in China. With no official Xbox 360 presence, launching Kinect would be kind of pointless.

That's not to say one can't buy video games in China. There are... other ways. No doubt Kinect will find its way undetected via the unnecessary, thriving black market.