FIFA 10 Is The Fastest Selling Sports Game Ever 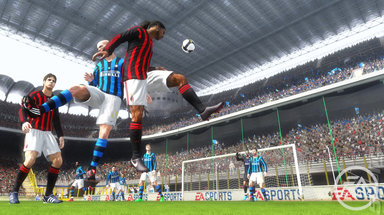 We all knew that FIFA 10 was going to storm the European charts upon release. That much was certain. What's quite surprising is that EA's latest football game has smashed sales records by shifting 1.7 million copies since its release on October 2nd.

The game hasn't even been out a week and it's already rocked up 10 million gaming sessions from 155,000 gamers, has given EA reason to celebrate its biggest European launch in its history, and is the fastest selling sports game ever. That takes some doing.

EA SPORTS' Peter Moore chimes in with the happy; "We were confident that FIFA 10 would be a hit, and this week fans across Europe have shown just how much they love this game… We are incredibly proud of FIFA 10 and this kick-off for great, authentic football competition."

Of course, retailers have been selling FIFA 10 at various different price points, between the RRP of Ł49.99 to as low as Ł25 in certain supermarkets. That could have also done it.
Companies: Electronic Arts
People: Peter Moore
Games: FIFA 10