But what about the games? 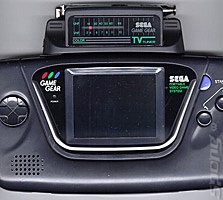 Sega Game Gear TV Tuner - Pioneering Technology that was Actually Rubbish
All Images (2) »
Sony has today announced the imminent arrival of new PSP firmware which promises to turn your PSP into an unbeatable portable Internet, music-playing telly machine. SPOnG fondly remembers the Sega Game Gear TV Tuner. We remember how excited we were about getting it. And, more so, we remember the palpable sense of disappointment amongst all of our friends when we realised it was actually rubbish.

PSP Firmware update 2.7, releasing at the end of May, will enable full Macromedia Flash support in the Internet browser; the ability to play AAC and all other leading types of music files; to stream podcasts to your PSP and save them to Memory Stick; plus, perhaps most excitingly, will also prepare your PSP to act as a receiver for LocationFree TV, the ?exciting innovation in remote TV viewing? that Sony has up its sleeve.

LocationFree, the press release tells us, ?is a completely new way of seeing TV. Instead of going to the television set, the TV comes to you (via your home TV tuner) wherever you are. You can watch live TV, play back recorded programmes and even set up future recordings, all from your PSP.?

The service will be available in UK, France, Germany, Belgium and Netherlands from May 2006. SPOnG hopes that it?s user-friendly and idiot-proof, otherwise we might just give up trying to make it work, like so many other hyped ?additional? features of the PSP to date.

For more info on all things PSP, head to the Your PSP site. All the wee machine really needs now is some decent games to play on it, so we have a real reason to pop it in our bags alongside the always essential DS.
Companies: Sony
Games: Outrun 2006: Coast 2 Coast

OptimusP 26 Apr 2006 08:20
2/4
I'm starting to have a growing feeling that the PSP is as game-dedicated as downloading games for your cellphone... a utterly irrelevant feature.
more comments below our sponsor's message

Ditto 26 Apr 2006 15:24
3/4
OptimusP wrote:
I'm starting to have a growing feeling that the PSP is as game-dedicated as downloading games for your cellphone... a utterly irrelevant feature.

When I was there, mobile phone games are vastly more popular than portable consoles.

Every train you go on, people are playing games on their mobile phones. Very few people play consoles.

If I wanted a machine to browse the web, watch tv, and cook breakfast... I would have kept around my pocket PC... it facilitates the features sony is trying bring out for their "gaming device", but it does it well...