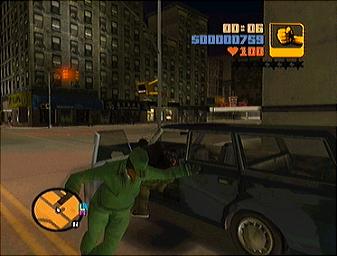 According to a study published this month in US journal The Archives of Pediatrics and Adolescent Medicine, authors Sonya S. Brady (PhD) and Karen A. Matthews (PhD) reach the conclusion that playing GTA leads directly to "permissive attitudes toward violence, alcohol use, marijuana use, and sexual activity without condom use".

Leaving aside for the time being the nailed-on fact that smoking dope and drinking heavily is often a lot of fun, SPOnG smells an academia-riddled rat here.

The objective in the study is outlined as follows: ?To test the effects of media violence exposure on blood pressure, negative affect, hostile social information processing, uncooperative behavior, and attitudes toward health risk behaviors among young men varying in lifetime violence exposure within the home and community.?

The mere fact that the title of the study is "Effects of Media Violence on Health-Related Outcomes Among Young Men" kind of suggested to us before we had read on any further, the kinds of conclusions which the two esteemed Doctors Brady and Matthews wanted to reach.

And here is how they claim to have ?scientifically proven? the link of shame. They randomly assigned 100 males aged between 18 and 21 to play either Grand Theft Auto III (a brilliant game) or The Simpsons: Hit and Run (a very average game).

Those players who were lucky enough to get a quick blast on GTA apparently, "exhibited greater increases in diastolic blood pressure from a baseline rest period to game play, greater negative affect, more permissive attitudes toward using alcohol and marijuana, and more uncooperative behavior in comparison with men randomly assigned to play The Simpsons".

SPOnG would like to know a little bit more about the methodology of the experiment. For example, did the gamers in the study have to fill out a quick questionnaire after their gaming session, in which they had to answer multiple choice questions along the lines of:


Or perhaps the gamers were offered all of these illicit pleasures on a plate. We can but infer. Whatever way they did it, we are glad to see that those fellows who were lucky enough to get to play the superior videogame, also got to get stoned, drunk and laid.

The conclusions Doctors Brady and Matthews reached were as follows: ?Media violence exposure may play a role in the development of negative attitudes and behaviors related to health. Although youth growing up in violent homes and communities may become more physiologically aroused by media violence exposure, all youth appear to be at risk for potentially negative outcomes.?

The conclusion that SPOnG has reached from reading this survey is as follows: shocking waste of US taxpayer's money.

One last thing ? for any children or half-wits reading: SPOnG needs to tag on a health warning to this story. Please be aware that drinking too much - especially on school nights - leads to alcoholism and long-term depression. Also, smoking loads of low-quality soap bar is likely to rot your lungs quicker than an 1980s-vintage Skoda dumped in an acid bath.
Companies: Rockstar
Games: Grand Theft Auto 3 The Simpsons: Hit and Run