Exclusive: PlayStation 3 to be E3 Rarity

New console expected to be tightly controlled at show 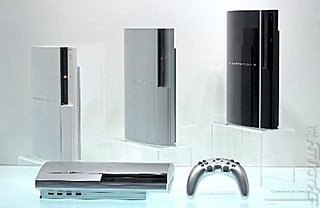 Those heading to E3 this year expecting the showfloor to be awash with PlayStation 3 hardware look set for disappointment, as information emerges pointing to a tightly-restricted hands-on debut for the new machine.

Over the last few weeks, SPOnG has heard from numerous sources within third-party publishers and at various developers, all of whom outlined that their product being readied for E3 would not be shown on Sony's stand. Furthermore, the availability of demo units to third-parties for inclusion in their own booths has not been outlined, leaving publishers and developers unsure as to what they will be able to show, even at this late stage.

"From what we have been hearing, the PlayStation 3 will be shown in a similar way to which the PSP was debuted at E3," one publishing source told SPOnG last week. "Attendees will be able to view the machine in a tightly-restricted environment. People thinking the floor will be awash with playable demo pods will be sore if they walk through the doors expecting to be able to sample a massive range of [PlayStation 3] software at leisure."

Several people we spoke to made the PSP showing analogy, news that will come as disappointment to most. For non-press attendees, a glimpse of the PSP was almost impossible with queues of five hours or so to see the machine blighting the debut.

But will the PlayStation 3 be on open play or will it be shown in a similar way to the PSP's first E3 showing? "We are expecting big queues to see the PlayStation 3 and so will be taking great care to manage the crowds in the best way possible. All press will certainly have no problems seeing everything we are showing. This year is going to be huge for us. Not just in terms of what we're showing, but in the major announcements we have planned."

As to how restricted access to the PlayStation 3 will be, we'll find out on May 10th, though SPOnG fully expects demand to go hands on with the system, and its new controller, to greatly outstrip the supply of playable units.

We'll be going hands-on with everything shown this year. Stick with us throughout the show for the important bits of E3, with most of the crap filtered out.

ann0uk 10 Apr 2006 10:43
1/14
I firmly believe that the PS3 is not that far in development as they are indicating. Maybe they will prove me wrong but I cant see them making the november world wide launch date.
This years E3 will belong to Nintendo.

Dukered1000 10 Apr 2006 12:54
3/14
Thats because of all the time they invested in the Cell chip. Futhermore the trouble theyre having in making it function optimally.

Another thing is the software... you can't get to work on that untill you've go the harware spec finished or some sort of model.

crs117 10 Apr 2006 15:04
5/14
Whats funny to me is that everybody dogs nintendo for being horrible with pr, but as far as I can tell nintendo has basically owned the last several E3's and this year will be no exception. I thought it was brilliant how nintendo owned last years e3 without much of any mention of the revolution while sony's conference touted the greatness of the ps3 vaporware and MS had demo x360's (running on twin dual g5 macs) on the show floor. How did nintendo own e3...reggie kicking butt in the nintendo conference, the DS, and Zelda.

I cannot wait to see nintendo show the world how to properly announce the introduction of a next gen system at this years e3. I cant wait to watch the nintendo press conference.

ann0uk 10 Apr 2006 17:21
6/14
It will be great to see Reggie come out all guns blazing at E3. It is going to be one hell of a show and from what I have seen of the Red Steel screen shots it looks like the Revolution will be very capable piece of hardware indeed.

Red Steel (and the added interview with George Harrison, though he is a bit of a boring numbersguy, he's always straight with his answers and doesn't spin them with pr-bullshit) is creating more of a riot then any game MS or Sony have been uttering for their next-gen consoles and it isn't even a first-party Nintendo game.

Now more then ever the potential of the revolution is becoming more clear (not completely clear but clearer then before), it has the potential to make those dual-analog controllers look like fossils of some old period where we somehow tolerated the abomination that is dual-analog aiming. Red Steel's (incredible immersive sounding) gameplay can not be copied by Sony or MS as it stands now.

warbaby 10 Apr 2006 20:12
9/14
Sony isn't really helping its own case. Not only are they allowing themselves to be forced off a cliff, they're going into it full steam. It seems Nintendo played their cards pretty well. We got to see the Revo last year, great... we saw the 360 and PS3 too. But theres still more for ninty to get into, they've only shown us bits and pieces along the way. Sony has pretty much already layed it all out at last years E3, now they'll be able to showcase the Dual Shock 3.5...

Props to Nintendo, right when I thought I should ask them what they were smoking.

ann0uk 10 Apr 2006 23:54
10/14
I am a bit concerned about Sony's redesign of the controller, according to that British guy (phil something) there will be some exciting new additions.
I smell a rat, but then again this guy is always full of Sony PR bullshit.

I highly doubt that for sooo many reasons. The redesign will be less boomerangy and maybe that some lcd screen like display at best.

thane_jaw 11 Apr 2006 12:13
13/14
vault 13 wrote:
I highly doubt that for sooo many reasons. The redesign will be less boomerangy and maybe that some lcd screen like display at best.

Wasn't the Dreamcast universally shot down for trying something similar with an LCD display on its memory card?

warbaby 12 Apr 2006 03:05
14/14
thane_jaw wrote:
vault 13 wrote:
I highly doubt that for sooo many reasons. The redesign will be less boomerangy and maybe that some lcd screen like display at best.

Wasn't the Dreamcast universally shot down for trying something similar with an LCD display on its memory card?

Yeah, but saying that the DC's LCD was despised is like telling a suicide jumper his mom is ugly after he's jumped...
Posting of new comments is now locked for this page.