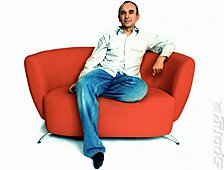 We just got off the blower with none other than our favourite ultra-rich developer Peter Molyneux, who sounded in good spirits. Well, you would be, really, wouldn?t you, seeing as Microsoft just bought out Lionhead Studios for 'an undisclosed sum' (read: shedloads of wonga). And whilst Peter was quite coy about the exact amount, saying that ?...both parties felt it was a fair deal?, it is fair to say that the formerly rich and very clever Peter Molyneux has just become the uber-rich and extremely clever Peter Molyneux.

The purchase of Lionhead Studios is part of Microsoft's efforts to secure exclusive titles for Xbox 360, Microsoft gaming division head Peter Moore saying of the deal, "We are delighted about this. What we love about Peter is the innovation he brings.... Not least is the fact the Peter is probably one of the most accomplished game developers in the world. What we were looking for is a developer that can touch the nerve of a gamer. We are not afraid to take a risk. With Peter Molyneux you have someone who is able to push the boundaries."

The first thing that we really have to say about Peter - and this is not only because we secretly want him to loan us ten grand to blow at E3 this year - is that he is such a charming and courteous man. It?s a genuine pleasure to speak to somebody who hasn?t forgotten about how to properly butter up a journalist. We are sure he doesn?t really give a shit about the weather in north London, for example, but it was the fact that he asked that counts.

Speaking of what was on the horizon for Lionhead, Peter told us that, ?There are currently two very big world class titles in development. I?m afraid I can?t really give any more specific details on either, only to say they are both very unique and very different. We currently have two fully formed dev teams working on each. One of the teams has been around for some time and one was formed fairly recently. There are about 150 people in total. Both teams and both titles show A LOT of ambition.?

SPOnG next quizzed Peter about the now almost legendary Project Dimitri ? the game project which Peter has previously told us ?...sees the player set in a world in which he can do whatever he wants as the world evolves around him.?

Peter told us that Project Dimitri ?...has been around for some time. It?s basically a teaser to help us show off our new next-gen technology.?

When pushed about what this ?new? technology comprised, Peter mentioned four specific areas ? graphics, AI, emotion-driven gameplay and - the one which we think he sounded perhaps most excited about - the possibilities of developing specifically for online play on Xbox Live.

It?s not hard to see how some kind of Life Sim in which you potentially had the option to re-live your own life - played online with millions of others - might be, well, just a little mindblowing.

Speaking more generally about the acquisition, Molyneux coolly noted that he was "Extremely excited about being part of Microsoft? They have long supported our creative vision, and this gives us the stability and opportunity to focus on creating world-class next-generation titles.?

When asked about Fable 2, Peter remained tight-lipped, only telling us, ?I can?t officially say anything about Fable 2 at this point?. We will leave it up to you to read into that statement what you may.

And what about E3? ?Oh you will definitely be hearing from Lionhead at E3. Its unthinkable that I would miss an E3,? said Peter, sounding genuinely excited. He added that, ?I think it should be a really interesting year this year, there are a lot of major announcements being made and it?s a critical year for the industry.?

And on that note, he bade us goodbye, mumbling some apologies about not being able to tell us more of the facts and figures about the Microsoft deal, but promising to let us pop up to Lionhead sometime soon to let us check out some of these new technologies for ourselves.

SPOnG also managed to tie him down to give us a proper in-depth interview at E3 out in LA next month, which we are thoroughly excited about. Whatever comes of it, the man is a pleasure to speak to and a true innovator. SPOnG salutes you Peter, your success is thoroughly deserved.

And before all you Sony and Nintendo fanboys start harping on about him being a sell-out blah blah blah, just ask yourself this ? do you want a creative innovator such as Molyneux spending his time worrying about how to fund his next Populous, or do you want him spending most of his time thinking about how to make better games? Simple answer, really.

Well, that was a nice little surprise for us. It?s always nice to catch up with old friends, especially when they?ve recently become zillionaires.

See you out in La La Land Peter. We can maybe go kick it at the Body Shop one night. We are sure that you remember that SPOnG?s favourite brand of champagne is Cristal. And about that ten grand loan?
Companies: Lionhead
People: Peter Molyneux
Games: Fable Populous

OptimusP 6 Apr 2006 17:55
1/4
I'm happy he sold out to MS...now he has money to start a new studio to make some rev-games (except offcourse if he really sold out to MS and now has to diss the Rev and it's controller while at TGS 2005 he clearly praised it), Back & White is like designed to be controlled with a 3D-mouse, Fable the same.

Besides, the Revolution has that 512 mb flash memory that could be used in a 64DD-kind of fashion and i hope that some still remember the talks about Earthbound 64 and how it would use the 64DD to have gameplay that Molyneux promised Fable would have (but didn't).
Begs the question, who's the more far-sighted? Nintendo or Molyneux?

crs117 6 Apr 2006 20:34
2/4
Tis truly a shame not to be able to see what kind of cool things he would have done with the rev after all the priase he has given it in the past year. I really thought he was excited to work with new ambitiously deisgned hardware concepts then simply with prettier graphics.

I do have a 360 and yes i will probly buy every game he produces for it, but my heart is sad to see such an innovator miss out on the most innovative game system this gen.

I love molyneux's work and have since populous and syndicate days. I wish nintendo had approached him first.

thane_jaw 6 Apr 2006 22:50
3/4
Does anyone else long for a proper sequel to Syndicate - my early psychotic childhood was spent playing that in slow motion (my petit Amiga 500 was strained when more then two things were happening at once, I think the Atlantic Acclereater MIssion dropped to 1fps) and think its the most fantastic IP not to have a remake.

Anyway, is one of the new games B.C., I know it got dropped for the Xbox in favour of the 360 but I can't recall anything other then that. I remember thinking it looked a lot more approachable then Fable and Black and White - plus thinking like a caveman sounded quite fun.

populus and syndicate absorbed much of my early pc gaming days once i realized there was more to pc gaming then kings quest.