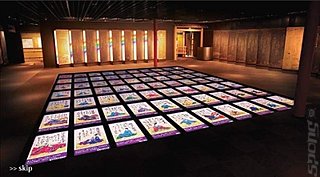 All Images (3) »
SPOnG is a fan of many art projects based on videogaming, so our ears pricked up when we heard about a newly-opened museum in Arashiyama, Kyoto, featuring some astounding digital interactive installations personally funded by Nintendo's Hiroshi Yamauchi and creatively overseen by Shigeru Miyamoto.

Shigureden is a newly-opened museum, showcasing and celebrating the ?Ogura Hyakunin Isshu? ? a culturally important anthology of 100 poems by 100 different Japanese poets from the middle ages. For the literary scholars amongst you, the poems are all pre-haiku 'waka' (now called 'tanka') - five-line poems of 31 syllables, arranged as follows: 5, 7, 5, 7, 7.

The really interesting aspect of the museum, to SPOnG at least, is the fact that the digital and interactive installations at Shigureden have been bankrolled by Yamauchi and designed by Miyamoto.

Visitors use a DS-based device to guide them around the museum, called a ShigureNavi which is described as ?a kind of Nintendo DS without buttons? with only touchscreen and volume control.

The ShigureNavi receives signals from ceiling-mounted transmitters around the various exhibition spaces, which deliver location-relevant content to the ShigureNavi in the visitor?s hands. It certainly beats following a bored mature student carrying a coloured flag around some dusty museum!

As well as acting as a location tracking device, visitors can also use their ShigureNavi to control their environment. For example - and this really has blown us away - on the installation pictured in the top and bottom photos alongside this story, you will see that there are seventy 45-inch LCD monitors embedded in the museum floor. As visitors walk around the floor they look down at a detailed, animated aerial photograph of Kyoto ? so they actually feel as if they are walking in the sky above the city.

Visitors can use their ShigureNavi as a sky-walk navigation system, specifying what the want to see and where they want to go in the city below, with a big bird under your feet guiding your sky walk. Visitors can also play ?sporty card games? using the device and the floor-embedded monitors. SPOnG is not sure what these games are made up of, as our command of the Japanese lingo is not what it should be.

If you check out the second picture to the top right of this story you will see that there is also an installation which looks very much like a huge Nintendo DS. With this feature, visitors can play card games with ancient historical characters, who they can see on the top screen across from them as they control the decks of cards with the huge, horizontal touch screen at the bottom.

It?s great to see that Nintendo is continuing to innovate in ways above and beyond their magical videogames. Shigureden certainly sounds like more fun than most art exhibitions and museums we?ve been dragged around in the past by well-meaning teachers, friends and parents.

crs117 4 Apr 2006 18:42
1/1
I would love to check this place out. I cant begin to imagine what all cool gadgets and gizmos and fun displays they have in there.
Posting of new comments is now locked for this page.