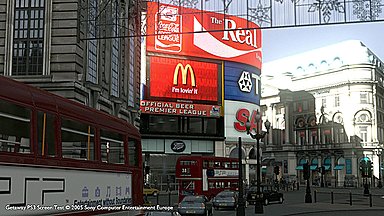 All Images (3) »
Phil Harrison has just wrapped up the PlayStation 3 keynote address in San Jose, outlining the future of the console as a viable development platform able to dominate the world of next-generation gaming, high-definition movie viewing and community-driven online entertainment.

Harrison, the enigmatic UK-based executive, began the presentation by revealing God of War 2 as, for now at least, a PlayStation 2 exclusive. He asserted that the PS2 remains the dominant home machine in its class and this level of first-party support will be mirrored by that of third-parties in the coming years. God of War 2 will be playable at E3 and released in time to make Santa's sack bulge with the joys of mature gaming.

Keeping us in suspense, Harrison went on to outline the performance of the PSP. According to SCE, the PSP is the fastest growing console ever, noting that it has sold in greater numbers since launch than the original PlayStation or the PS2. It has not compared against other consoles, notably those of Nintendo. A price-slash for the PSP development kit was announced, taking the complete unit down to $5,000. Details from Kutaragi's address from last week were underlined. The next Firmware update will reward adopters with a Flash-enabled browser, RSS channel and video calls. Interestingly, the video camera will ship into stores around the world this October, much sooner than had been expected.

Harrison also mentioned that GPS functionality will soon come on board, noting that, ?Although geocaching is as underground as it gets, who can't see potential??. There was more meat added to the bones of the PlayStation One download service that has lit the imagination of gamers since it was revealed last week. Two server sets will be put online this summer: PSP Content Server and PSP Archive Server. Archive will carry PlayStation One software.

And then to PlayStation 3. Harrison outlines that the PlayStation 3 will enjoy 100% backwards compatibility with the PlayStation 2, with every game released expected to work and, we expect, available for download at some point next year. 1080P was 'the standard' to which PlayStation 3 will be set. A tone of smugness was detectable as Sony gleefully trumped Microsoft's 1080i and stole any HD era claims. It was revealed that the PlayStation 3 will offer full HD support in all fields in which it is deployed, making use of the latest HDMI technology. As well as broadband connectivity, wireless support between PSP and undisclosed devices was mentioned. Harrison also threw the issue of PlayStation 3 hard disc inclusion back into the world of mystery. He mentioned that HD support was a major feature of the new machine, though went on to say, when questioned after the address, ?Hard disk drive is a key feature for the PlayStation 3 and is a key feature of the platform. Developers are designing their games to support a hard drive. Every single game will support a hard drive.? Though when asked directly if every machine will come equipped with an HDD out of the box, no comment was offered.

Harrison then explained that a wealth of top-end middleware would be available for PlayStation 3. Epic's new Unreal Engine, PhysX from Ageia and HAVOK will all be available in final PlayStation 3 form for developers in time for E3. A full suite of tools from SN Systems will also be delivered for May, including its acclaimed Debugger, Tuner and Compiler duo.

Various demos were shown, though only one was in on-stage real-time form. HAVOK showed its ragdoll physics demo again, a scene featuring fish gliding through water, a massive war scene believed to be a new Warhawk game and two scenes from The Getaway, one of which was a gorgeous rendition of London's Leicester Square complete with moving camera on the fly. Insomniac showed a great video of Resistance: Fall of Man, the game formerly referred to as I8, Evolution Studios showed Motor Storm, its replacement for its long-standing WRC offering. The dirt-racing demo highlighted the contextual adaptability of the PlayStation 3, with tracks being changed by vehicles, mud drying and baking in the sun and making the track tougher. Impressive stuff.

More big news with an outline of the online service to be made available for PlayStation 3. Currently known internally as The PlayStation Network Platform (a name that will be revised for public use) the Live-rivalling Internet portal will launch on day one of PlayStation 3 availability. All users will be able to access the service for free, though various paid offerings will comprise its mainstay. Free activities include a meet lobby with gamer matchmaking, game rankings and stats and, excitingly, voice and video chat. Sony will also offer its own shop to sell undisclosed content, all of which will be stored to the machine's hard disc. Harrison took great pains to explain that Sony will offer a highly flexible service to its partners, employing a diametrically-opposed ethos to that of Microsoft. Subscription services for ongoing gaming (the success of World of Warcraft was noted) paid downloads and micro-transactions for in-game items will all be on offer to publishers and developers. Harrison also outlines how third-parties could use bolt-on online offerings, using their own payment, technical and management preferences. The initial PlayStation Network Platform software development kits will ship to developers this week, with a final environment available in September.

It was further outlined that payments via the online service launching will be channelled towards the furthering of episodic game content to the mass market. Harrison also mentioned in-game advertising and SCE's belief that games can be bolstered by what was described as 'social currency' meaning the buzz they generate on a regular basis with consumers, mentioning Lost and 24 as prime examples of episodic TV content with massive social currency.

Furthermore, some content will be available only in downloadable form, pushing users online where they will, all going to SCE planning, try out and then adopt other features the service has to offer.

The presentation was fairly light on hardcore technical information, somewhat of a surprise given most of today's attendees dream in binary. Harrison did, however, outline that the PlayStation 3's Cell Processor will come complete with seven SPUs. An SPU, as outlined by Cell partner IBM, is a Synergistic Processing Unit. ?A key innovation in the Synergistic Processor Architecture is the use of scalar layering to map scalar computation on a pervasively data parallel architecture as implemented by the SPU.? As Harrison explained, to games developers, this means that the routines that comprise the nuts and bolts of any game can be split between these seven co-processors. Physics, AI and other raw game-driving processes can now be handled by SPUs, meaning that developers will essentially have more space to work within without having to worry about balancing massive amounts of game core processing inside a single processing device. It was pointed out that the storage offered by Blu-Ray means that, should a developer choose to, an unimaginable amount of content, detail and hardcore AI can be delivered to levels thought impossible before Cell.

Check back tomorrow for full details from Nintendo's keynote.

ann0uk 23 Mar 2006 00:43
2/5
This guy is full of s**t when he talks about PSP, i have seen him on TV before saying that the PSP is a huge success. Typical marketing and PR bullshit.
more comments below our sponsor's message

tyrion 23 Mar 2006 09:13
3/5
ann0uk wrote:
This guy is full of s**t when he talks about PSP, i have seen him on TV before saying that the PSP is a huge success. Typical marketing and PR bullshit.
The PSP is a largely successful product. It's the second best selling gaming platform week on week in Japan, it's had the best launch of any console in the UK, etc, etc.

It's just compared to the phenomenon that is the DS, its been a bit eclipsed.

OptimusP 23 Mar 2006 10:55
4/5
The Hardware sells like cupcakes sure enough (hasn't beaten the Game Gear yet though in total sales), but the gaming aspect of it is a flop... how many million sellers does the PSP have? maybe one.

But a iPod-killer? no... bumping Nintendo of it's throne of handheldsupremacy...hardly. A handy device that can do quite some handy stuff... that it is.

Grant Fresco 23 Mar 2006 20:39
5/5
I don't think the fuzziness is strange...simply a way of selling more...if they launch with 1 machine that has no hard drive for Ł150 and one with for 250 they can double there sales for those people that want it right away but don't like the high sales tag - if they have the units in place for xmas they will brake the 360 in half in terms of sales...They can also sell the hard drive for Ł150 a month or 2 after the release...something like that anyway

"That's what I think anyway VIctor"