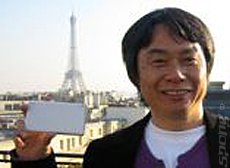 All Images (7) »
In an interview published on Nintendo of Europe?s website yesterday, Nintendo boss Shigeru Miyamoto, the legendary creator of Zelda, confirmed that there will be Revolution controller functionality with The Legend of Zelda: Twilight Princess.

When asked about the game, Miyamoto, who is in Europe to collect his Order of Arts and Letters from France, spilled the following magic beans: ?One of the most important features is that, because Revolution can run GameCube software, when you play Twilight Princess on Revolution you can take advantage of the Revolution controller.?

Okay, we are still left somewhat in the dark as to exactly what these ?special features? in Twilight Princess will be. There is talk of using the Revo controller to throw boomerangs and shoot arrows, but whether or not these features will be integral to the actual gameplay ? or will be bonus mini-games ? is still unclear.

Speaking more broadly about the Revolution, Miyamoto had the following to say: ?In the case of Revolution, there is going to be a lot of software that are so-called 'sequels' to the existing type of games, however what is going to be the most attractive point about Revolution is the other applications. These kind of applications are going to make Revolution something really important for any ordinary household; more specifically catering for each type of family member in the house.?

?Almost everything? will be revealed at E3, he tantalisingly adds. He goes on to admitting not being a ?morning person? (hooray!) to spilling some more beans on New Super Mario Bros.

When asked if he felt like a ?star?, Miyamoto laughed and answered, ?Well, you know I used to commute to work by bicycle until recently. But because I am now one of the executive board members, the company ordered me not to, for the sake of ?risk management?!?

Miyamoto ? dubbed 'The Spielberg of Video Games' by Time Magazine recently - along with Michel ?Rayman? Ancel and Frederick ?Alone in the Dark? Raynal, became the first videogame designers in the world to receive the ?Order of Arts and Letters? award.

Speaking about the award, Miyamoto humbly said: ?My feeling is that I have received this on behalf of many other people who have been working together with me to create videogames,? he says. ?And in a much broader sense I think it?s very important for the industry that we can receive this kind of award.?

For the full interview head over to NOE?s website right here.

gettign to meet him has def been the highlight of my rather short (so far) game related career. Can't wait for E3.

you forget to mention that Shigsy also gave some info about the Super Mario Bros for the Rev talking about ultra high jumping, mushrooms that make Mario gigantic and also very tiny and that he erased half of the story line ideas his team came up with (i can see it happening now, shigsy enters room "sir, i've written the story for the New Mario for the rev, it's only half a page" " HALF A PAGE!!! DO I LOOK LIKE HIDEO KOJIMA???!!! *shigsy grabs eraser*)

majin dboy 17 Mar 2006 00:37
4/4
god,lupos u met the master?thats amazing.
i actually dont know what id do if i met him.i mean what the fu*k are u suppossed to do....thank him,but thats sooo cliche.oooohhhhhh thank you sooooo much, i love your work,i hate sony etc etc.

in fact,i do know what id say i would ask him for a job.hahahaha,to see his face and then how he would have to say NOOOOOOOOOO....security.