Exclusive: Gizmondo Ferrari crashed at 162mph may be Stolen. Eriksson to Walk 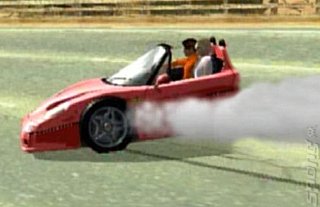 Stock Ferrari crash photo
As we reported yesterday, Stefan Eriksson, former executive officer of Gizmondo and a convicted fraudster and liar, saw his $1,000,000 Ferrari Enzo smashed to pieces in a high speed crash in Malibu during an illegal street race.

Speaking exclusively to SPOnG today, investigating officers revealed some startling new details on the wreck. Not only has the suspected speed of the crash been upped to 162 MPH, but it turns out the car is possibly stolen property, exported unlawfully to the US and driven illegally on the roads of California.

?It looks as though the car lifted up and left the highway,? Sgt. Phil Brooks of Malibu Sheriff's Department explained. ?That's what caused him to lose it. We're looking at the distances travelled, the wreckage and all of that and we've upped the speed to 162 MPH.?

Brooks outlined that he's fully aware of Eriksson's history. ?I've gotten just about everything on him. The previous prison time, the $290,000,000 or maybe it's a different figure, the Mafia ties ? even on some of his colleagues. Believe me, I've been taking calls from London, Sweden, everywhere on this. From the Gizmondo Caper...? And how does this look to Brooks? ?They duped them for all their money and walked out.?

Continuing on the crash details themselves, Brooks continues, ?We have to speak to all the witnesses and get their stories, compare the inconsistencies in [Eriksson's] statements and then reinterview him. And then if necessary we'll have to use physical evidence, possibly blood and collect that, if necessary.? Fingerprints too? ?All things like that. But you know, the bottom line is he's looking at misdemeanour charges ? not felonies. These are charges that would give him a year in county jail, though he'll 99.9% just get a fine. And someone who made $4,000,000 last year from what I'm told, a $1,000 fine isn't really going to do much to him. And the questions is, will the Sheriff's Department spend $500 on forensics for a $1,000 fine...?

Although it looks certain that Eriksson will escape with a slap on the wrist in the US, the further repercussions of so publicly planting himself on the radar might well catch up with him. Not least as, given the Gizmondo exec's history and emerging claims from a UK bank, the Enzo looks to be stolen.

?There are a lot of questions about ownership [of the Ferrari Enzo]. I have the Bank of Scotland telling me they own it. He brought this car and another Ferrari and an SLR Mercedes through customs. They're all show cars ? they're not street-legal. So there's issues there but that has to do with crimes elsewhere and they're probably more financial.?

And it continues. According to investigating officers, the Enzo looks to have been illegally obtained in the first place. ?Apparently there was some sort of fraudulent financing for it, and allegedly the Bank of Scotland repossessed the vehicle. I'm still awaiting paperwork from them but that appears to be the case.? So the Bank of Scotland tried to make good their legal repossession and Eriksson just shipped it the US? ?Possibly. I don't know the time lines on that but yes, that's what it looks like. The car still had a European registration ? nothing had been done to attempt to give it a Californian registration and he fully knew that he couldn't drive those cars on the street without that.?

So what next? Is it possible that you can have such an episode in your life and just walk away uninjured and completely free? ?You can take the step and maybe we'll get him behind the wheel as the driver, the other misdemeanours, though, usually will be just a financial penalty.?

Really, who in their right mind would think that Gizmondo is a good name for a handheld? And did you see the buttons? It's like the play, stop and s**t like in our remote controllers. It's bad enough we have the weird-ass button labels on the Sony consoles.

Serves him good, I say.

Really, who in their right mind would think that Gizmondo is a good name for a handheld? And did you see the buttons? It's like the play, stop and s**t like in our remote controllers. It's bad enough we have the weird-ass button labels on the Sony consoles.

Serves him good, I say.

President Evil 24 Feb 2006 07:05
4/10
Friends, c**trymen, murkans, don't get carried away. This man is rich - true it's with other people's money that he has 'stolen' - but if that was a crime, half the rich people in America today would be in jail, and so would the other half. The fact is that we rich people have a God-given right to do as we like without interruption or dissent from poor people like you - it's in the constitution somewhere - an if it's not, it was ce tainly the intention of the founding fathers that it should be. Rich people's driving speeds should be as unhindered as the free markets. After all - that's why we're rich, and if a few poor folks get hurt or killed - well, your expendable. Gobless murka!

TigerUppercut 24 Feb 2006 08:33
5/10
Look at the size of Eriksson.
He has that 'chaining you to a radiator and screaming holding a blowtorch' look about him. Glad I didn't spend most of two days trying to nail him...