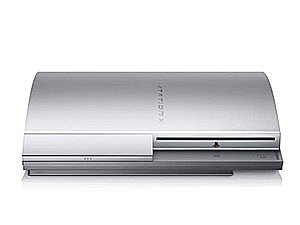 All Images (5) »
SPOnG would never say that magazines just make things up, hiding in the accountability void afforded by the antiquated media of print and miniscule readerships. We also have to socialise with our print press colleagues and pretend to like them as they pretend to like us*. So it?s better to keep things smooth?

Anyway, glossy American publication PSM has made some bold claims about Sony?s plans for the PlayStation 3, which we?ll summarise below:

According to an unnamed source quoted by the mag, PlayStation 3 is actually really easy to develop for, far easier than the Xbox 360. ?Both are friendly, but the PS3 may actually be friendlier. People are finding that the [Xbox] 360 has some stupid bottlenecks.? This is, well, completely opposite to everything we have heard to date. Still, you never know?

The PlayStation 3 is also considerably more powerful than the Microsoft offering, again according to nobody in particular. ?Once we have final hardware for both next-gen systems, we'll have a much better idea of how they compare, but the general consensus right now is that the PS3 is considerably more powerful than the Xbox 360 across the board," said another unnamed source. "It's important to get a good idea of which is the most powerful soon, since multiplatform games will need to be either ported down from PS3 to 360 or vice-versa.?

Sony is also planning to make an Xbox Live-rivalling online community, according to PSM. "They [Sony] have a whole division that was put in place after the Network Adaptor was released for PS2 that basically dropped focus on PS2 and moved to planning the PS3," another unnamed insider told the magazine. "They knew that early that they were not going to compete during the current generation."

Perhaps the most interesting assertion made in the article is that the PlayStation 3 will be released in all territories within the next nine months or so. ?Questioned further on the topic, Sony execs have since stuck to their guns, saying that the system would be available worldwide before next summer,? it says?

The Consumer Electronics Show in Las Vegas has been pencilled in for the PlayStation 3?s coming out party, with several first and third-party games promised by PSM. Electronic Arts is said to have the biggest non-SCE presence.

PMS - sorry, PSM - also claims to have specific information on two key third-party games, namely Grand Theft Auto 4 and Metal Gear Solid 4. GTA is said to be built on an entirely new game engine, news we can completely believe following today?s news on Liberty City Stories you can read here. The US magazine states that ??specifically, [Rockstar] is going to be using the high data transfer bandwidth of the Cell CPU, RSX GPU, and Blu-ray Disc to use several streams of game info simultaneously.? Whatever that means, we like it. If anything sounds like something someone from Star Trek might say about an unknown enemy spacecraft, it?s alright by us.

Metal Gear Solid 4 is said to be a cross between Rambo and Black Hawk Down. Really. ??with Solid Snake plunged into the middle of a high-intensity urban war zone where artillery is taking out cover all around him and AI controlled "sidekicks" fight alongside him as if they were actual human-controlled characters?? Tokyo Game Show later this week promises a closer look at MGS4, so expect further updates then.

The following game line-up for PlayStation 3 was also offered:

We?ll leave you to digest this. Let us know what you think - and there?s a lot to mull over - in the forum below.

*We do actually like some print journalists. Almost six of them.
Companies: Sony

YenRug 12 Sep 2005 13:11
1/7
Does this sound more like a Sony fanboy's wet-dream bablings, rather than a realistic analysis of what's to come? As was mentioned, most developers have been publicly commenting on how hard the next-gen systems are to code for, especially the PS3. This sounds way too much like the "amazingly easy" Emotion Engine fiasco all over again, from the PS2.

These days 95% of all releases seem to be sequels.

fluffstardx 12 Sep 2005 14:20
4/7
I smell a whiff of unwashed nether regions. I guess next month the US NGC equivalent will go "OMGWTF! Teh Revahlooshun does the bizniz on botha their chump asses! More powahfool than God!"

The fact you mentioned PSM just made me giggle... they never were any good, bless em.

curses... my only publishing is on the interweb :(