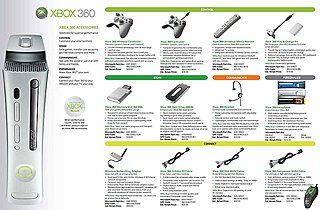 All Images (4) »
The issue of whether the Xbox 360 will be able to play original Xbox games has dragged on for so long now that, quite frankly, it?s getting a little boring.

Microsoft has confirmed a certain level of backwards compatibility, though details have been thin on the ground to say the least. Throwing some light on the question today are our women hating soon-for-jail-loner friends over at UKR who found this little gem buried amongst paperwork in their in-tray.

It?s a marketing brochure from Microsoft, reproduced in full to the right of this story and, as you can see, a hard drive will be required to play Xbox games on your 360. Exactly why this is the case is not clear, though we?re guessing that each game will require some sort of custom download from Live.

So have a peruse through the images and feel free to point out any other pertinent information in the forum below.

So without a hard drive, there's no meaningful backwards compatibility with the "most popular" Xbox titles.

As the scenario mentioned here-- downloading extra code from XBL for compatibility-- would also require XBL (which not every Xbox owner has) this seems extremely unlikely to me.

ozfunghi 19 Aug 2005 14:29
2/16
Maybe Sony and Nintendo could release the shell/casing of the PS3/Rev for 50 bucks, and sell all of the components as "add-ons" you need in order to play the games. Then they can say their console launched at a steal as well.
more comments below our sponsor's message

jadnice 19 Aug 2005 14:41
3/16
I agree completely with you. First, they are still running around like chicken without their heads. It?s all a marketing and money making scheme. The bottom line is that you have to have a hard drive period. The next thing is many of the games you spend your money on may never work with 360. These are things to think about before investing $400.

OptimusP 19 Aug 2005 18:23
4/16
Seriously, this X360 thing is looking more and more like a attempt for the world record of screwing over people as much as possible.
If some MS-guy mentions backwards compatibility now we can sue him and the bloody company for being lieing bastards (aka consumer deceivement trough confusing marketing, just look at all those beauty-companies getting their commercials called back because they're lieing their ass off).

I mean, some clever guys will probably buy a core X360, buy a 80 gig HDD that costs less then MS's 20 gig disk and modify the thing but then they can't use XBL because Microsoft has to be Big Brother older brother and block them. While MS is bragging about being so "customable" "make your console your own" and other crap.

While not knowing the full specs of the PS3 and Revolution, the stuff we know that these 2 will possess is half the bloody X360 pheriphal list and MS's deluxe verion doesn't even have that.

And where are the editorials on this ripp-of? This is bigger then Nintendo's "HD is not a priority for us" statement.

Joji 19 Aug 2005 21:36
5/16
Indeed it's true it is a farce. everyone might as well hang on to their original Xboxs because MS 360 backwards compatibility options are currently a very jaded shade of grey.

Many modders will buy two 360s, a cheap one to mod with a huge say 100-200GB hd. A second deluxe version to get on Live that's untainted. Perhaps this is the reason behind the two versions along with the casual gamer motive. This way MS sell twice as much 360s with most people buying the top range pack but the bottom range one still shifting giving modders options but keeping them off of Live.

Whether this will work remains to be seen but time will tell especially with PS3 and Rev on the way. Now out of those two I can see Sony having the most trouble because their PS3 comes with no hd whereas Rev atleast has something on board. And with the Rev coming in at most likely cheaper than 360 cheapo pack, Sony are gonna be caught between two 360s if not above them on the RRP.

PreciousRoi 20 Aug 2005 08:03
7/16
Backwards Compatibility ranks somewhere in my universe of Important Features in a Gaming Console somewhere beneath, a storage compartment for marijuana, but above cupholders.

If even a single man-hour of work went into making a console backwards compatible, that could have been used productivly, like say...making the controllers proof against spilled beer...or improving the range and reception of the wireless...or making multiple cool dashboard themes, then twere an hour wasted to frivolity. IMNSHO.

Praxis 21 Aug 2005 19:35
8/16
"It's not clear why"? How stupid are people nowadays? I've seen only a few people actually surprised by this, and I shook my head and muttered 'idiot' each time. Now I have to do the same for the Spong writers.

1) Every XBox game caches to the hard drive.

2) The XBox 360, as hardware nerds know, is NOT powerful enough to easily emulate the XBox. It's power is divided across three processors; you can't use three processors to emulate one. Therefore, the X360 can only use 1/3rd its power to emulate the first XBox, and with the completely different architecture and the lack of out-of-order-execution, this becomes very difficult.

Instead of a general purpose emulator, Microsoft is using patches (which they dub 'emulation profiles') that are stored on the HARD DRIVE. No hard drive = no emulation profiles/patches = no way to play old games. The very design of the XBox 360's limited backwards compatability (only the patched games will run) makes it impossible to do without the hard drive; further, games that aren't patched at launch will require you to go online and download the new patches, so no internet connection = less games you can play.

LUPOS 22 Aug 2005 04:17
9/16
PreciousRoi wrote:
Backwards Compatibility ranks somewhere in my universe of Important Features in a Gaming Console somewhere beneath, a storage compartment for marijuana, but above cupholders.

i have every video game system i ever owned nice;y arranged on shelvbing in my lvign room... ranging from my colleco vision to my virtual boys (yes two of em) and i have no interest in selling my old system to get a new one... seeling it used woudl only scrap in a measily 50 beans anyway... oh but if i trade it and like 20 games you say i can get the whole new system for free? but then i wont have any games to worry about playing backwardly!!

the people who are nuts enough to want to save all there old games gerneal want to save there own systems... and if you are so effen lazy that yu can plug your snes in every 6 months when you feel liek playing donkey kong country then its obviously not worth it (especailly since the cube uses the same video jack, you would only have to swith the power, and i belive ps1 and ps2 both share the same power cord as well)

sunkai 22 Aug 2005 06:54
10/16
I skipped the XBOX, siding with Mario and his underdog cohorts this last generation. So for me, the big M's technological battle to enable backwards compatibility, was not a consideration when laying down my Ł20 deposit at GAME.

However, as a cube owner, hearing that the rev will not only be able to play my GC games but be able to use my peripherals as well, was a big win from my point of view.

1. Shelf space is at a premium under my television and stacking consoles on top of each other will only make them over-tired and excited.

2. Between my Wavebirds and Bongos, the investment in another set of controllers for the rev would have been a costly exercise (although perhaps still necessary given the apparent innovation in its native controller).

3. If there are gains in AV quality to be made from the next generation's output standards, I want my legacy titles to get that same sheen as well.

If you bought a PS2 early in its life, you had access to several hundred PS1 games you could also play,

When you bought a GBA, you could also play GBC games on it, a huge back-library.

The DS also benefited from this effect of inflated games library goodness.

Having your new console/handheld play the games of your old one means you don't have to produce as many launch titles for the new console. That should mean they are of a better quality than they otherwise would be.

The success or failure of this approach on various consoles is left as an exercise to the reader.

fluffstardx 22 Aug 2005 12:41
12/16
As had already been said, most Xbox users knew this already. We've heard the noise of a HDD caching before, and we hear it all the time while playing Halo 2, Forza et al. I'd said from the start it'd be via patch, and that's why I'm waiting to hear from Gamestation about what they're doing for launch. After all, the PS2 had a "trade in PS1 and 5 games knock Ł100 off PS2" deal, so if they do that for this I'll be happy as it makes up for paying for the more expensive package.

miacid 22 Aug 2005 14:11
13/16
We still have to factor in the dumb parent/shop assistant syndrome. For a start most parents will just see the cheap one and go for it, only to return it in a week when little johnny can't play Manhunt ;-) The same could be said for your casual gamer!
Then you have the guy behind the desk, if asked whether or not it can play old xBox games, what do you think they'll say?

Like someone said earlier in this thread, MS are just out to make money. Not that I'm saying Sony and Nintendo aren't, it's just they hide it a lot better.

king skins 23 Aug 2005 12:46
14/16
miacid wrote:
We still have to factor in the dumb parent/shop assistant syndrome. For a start most parents will just see the cheap one and go for it, only to return it in a week when little johnny can't play Manhunt ;-) The same could be said for your casual gamer!

This is begining to really annoy me now.

ALL GAMES WILL WORK WITHOUT A HDD

ALL GAMES WILL WORK WITHOUT A HDD
None of the XBox 1 games will work without a hard drive. That's the point of the story this thread is attached to.

ALL GAMES WILL WORK WITHOUT A HDD
None of the XBox 1 games will work without a hard drive. That's the point of the story this thread is attached to.

Sorry my bad, thought he was on about normal 360 games. My appologies to miacid