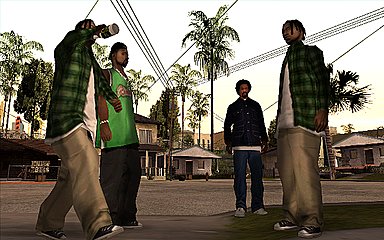 It would appear that the PlayStation 2 version of Grand Theft Auto: San Andreas includes the Hot Coffee sex mod, with cheat codes proving the full, highly explicit scenes were not the work of the hacking community. This bombshell wraps up the issue of the origin of the saucy code, proves Rockstar sought to deliberately mislead the public and adds weight to calls from conservative groups to have tighter controls on videogame content.

Here's how you can see it, on the PlayStation 2, for yourself. You first need to go and buy an Action Replay Max device. You then enter the following code:

The code comes with a warning that saving your game when the mod is active might corrupt existing saves. So now you know.

To use the code, you need to take one of CJ's ladyfriends out on a date. Should the date prove successful, you'll be invited in for coffee. Instead of the usual censored external view of a house with some girlie moaning coming from it, you'll be treated to a fully interactive sex experience including the ability to assume three different positions of love.

And back on point, this proves that the mod was always in the original game. As you will know, Action Replay and similar devices can only manipulate existsing code within the game. It cannot add new content. All of which leads us to Rockstar's comment on the issue made last week. When bombarded by endless questions on the matter by the press and, no doubt, several official sources, Rockstar released the following statement:

"Since the 'Hot Coffee' scenes cannot be created without intentional and significant technical modifications and reverse-engineering of the game's source code, we are currently investigating ways that we can increase the security protection of the source code and prevent the game from being altered by the 'Hot Coffee' modification." Rockstar made this comment in reference to the PC version. As you can see the firm clearly and deliberately implies that the mod is the work of an external force. Which, well, you know, isn't really true...

SPOnG readers will be aware that the the Hot Coffee mod has already attracted the attention of videogame censorship proponents such as Hillary Clinton seeing calls for stricter controls on videogame content. Now, as some sources have pointed out, there are no rude bits actually shown in the scenes. You don't get to see a stiffy, front bottom or anything that might be deemed as crossing the line, making the mod no more explicit than an episode of Bored Housewives, a fact that Rockstar will no doubt point out when it meets with Senator Clinton, the Federal Trade Commission, David Walsh, president and founder of the National Institute on Media and the Family; Mary Bissell, fellow at the New America Foundation; and Kiersten Stewart, director of public policy for the Family Violence Prevention Fund - an imposing bunch. The point of the meeting, which is not yet dated, will be to determine who is responsibe for the Hot Coffee mod in San Andreas.

Whilst the content is on the CD, someone had to pick apart and reassemble the PC version to get access to it- reverse engineering and technical modification. Action Replay does the same thing, more or less- it doesn't permanently edit any files, but it does set variables whilst the game is running to values they would never normally be.

The tricky word is 'created', but I'm sure they can get around that by saying something vague about interactivity and how the player 'creates' the scenes within the game etc etc

But, if we're being reasonable, I agree that they're lying bastards. I'm sure there's some Gilligan/Iraq/GTA/Sexed up DOSier joke in here somewhere

claudioalex 19 Jul 2005 03:37
3/9
There is no wonder, they use filthy ways to sell theyr crap to childrens, it is obvious they are capable to lie shamelessly to the world,
Even knowing that they got cauhgt in the lie, they would take advantage of the sad episode to create more hype to sell theyr criminal products.

Time will punish them,

Elysium 19 Jul 2005 04:24
4/9
It really amazes me, how all of these politicians are constantly playing the blame game to try and score points, all in the name of achieving a name for themselves in the media.
It's not rockstar's fault. This feature was obviously never intended to be available in the final release of the game, else it would have been easily accessible.
It's not the game's fault... there are plenty of other sources of violence and sex out there, all easily accessible to our children, including the nightly news, which one could argue is more violent and influential than a digital (and obviously unreal) depiction of violence.
I blame the lazy parents who can't get off their fat arses and participate enough in their child's life so as to know that the game they are playing is clearly rated for adults! It doesn't matter in which magazine it was advertised, it is the parents' responsibility to monitor their child's television viewing, book reading, game playing habits and to educate their child on the morals they wish to impart. Five minutes of discussion with your child could easily reveal the games they play at their friend's house, the book they're reading at school, etc. GET OFF YOUR FAT F**KING LAZY ARSES AND PARTICIPATE IN YOUR CHILD'S LIFE, INSTEAD OF LETTING TELEVISION AND GAMES PLAY THE ROLE OF NANNY.

Rod Todd 19 Jul 2005 06:01
5/9
Elysium wrote:
It's not rockstar's fault. This feature was obviously never intended to be available in the final release of the game, else it would have been easily accessible.

Oh don't be stupid. If it was never meannt to be in the final game, it would never have been on the disc.

BigRockCockStar wanted this there... so that it would cause controversy. Let's face it who would still be talking about GTA:SA if this WASN'T in there?

Let's face it, it's just marketing, and SPOnG are being suckered into it as much as anyone else.

OptimusP 19 Jul 2005 12:24
6/9
Well on one side: there are a lot of games who have these kind of "hidden" stuff in it but you need a Action Replay to take it apart and make it surface (The Wind Waker hidden beta-levels and itemslots is an example) because developers are a bit lazy to find that code and delete it and how can blame them. You can't blame Rockstar for hidden stuff.

But Rockstar is famous for hiding these kind of very provocating stuff in their games, probably they leaked the codes themselves. On that they should be punished, very hard, because they lied about that.

But then the third factor...why does a 15-year old own a 17+ RATED game. IT'S ON THE BLOODY BOX YOU IDIOTS!! Go look under your son's matrass...oh no...playboys!! go look on his PC's Internet History!! Dumb Hypocrits.

GTA is an adult game but kids will always be attracted to forbidden fruit, that's part of human nature. If parents fail to vet and spend time with their kids to see what they are consuming there will be reprocussions and they are to blame. I'm so tired of parents not being held responsible for their kids, I know it's not easy but please don't patronise us.

I find this interesting that this storm is being whipped up in the u.s since they are the stupid about this kind of stuff. If they had a rating system using more colours like ours things would be better but will never stop the problem of forbidden fruit in the hands of minors. Word of mouth is a powerful thing amongst the young and most of them wanna be gangster these dyas to, like in those hip hop/rap/rn'b videos.

Sure GTA is that kind of open ended game where you can do more things so why is it that when a game like the Sims that features obvious sexual stuff in it (suggested or otherwise) is okay but GTA gets hauled for something that people can't even access until now. Double Standard Express, stopping at a game store near you.

Hackers and yanks opened the bottle so now those kids will be back to fiddle with GTA:SA again. Action Replay Max is gonna do some good business

There's no such thing as bad publicity, even Mrs Clinton will tell you that. Does she really think she'd be where she is if her hubby hadn't accepted intern blow jobs? Of course not and she knows it. She benefitted even though she was hurt too.

Mrs Clinton isn't gonna do the homework herself, she's gonna have a legion of yes men to do their flawed biased research for her. I'm all for keep the likes of GTA etc from kids but they can find much worse on the net seeing as they tend to be more tech savy than there parents.

If this was gonna be part of the final cut and was left in it might be because of lazyiness but could also be due to deadlines and pressure from higher ups that is was hidden instead of removed altogther. I'm sure many games have the same kind of thing, though possibly without such hot coffee (mmmm...what other secrets lay buried in my game collection?).

This whole thing has been blown way out of proportion but I'll be looking forward to what Rockstar have to say to slap down Mrs Clinton and co. There's nothing wrong with u.s game ratings but a more visual approach would be better.

Another thing I find strange is how GTA is from a u.k based company so we are taking the many into the u.k industry, while the yanks in Hollywood push out plenty of proper hot stuff in films but not a eyelid is batted because the money is feeding the u.s film industry. Once again double standards.

We don't have to answer to those yanks but it should be a laugh doin so anyway. I can hardly wait for the match up, Clinton vs Rockstar, round one, FIGHT!

BUT, this company deliver marketing tactics that are directed stright to children media,
also, they told us a huge lie to cover something they know it would harm theyr credibility,
Why they lied?
why dindt tell us the true? that the PS2 game has this content?

They know theyr are doing something wrong, otherwise these lies wernt necesary.