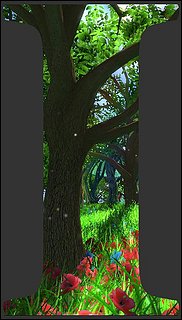 Another day, another sneak peek of something Xbox 360-related, this time a game shot, offered as usual by ourcolony.net, Microsoft?s viral online marketer for its next-generation home machine.

This time around, the game in question is a little more difficult to pin down, following the ease with which this image was identified as being snatched from Project Gotham Racing 360.

Chief suspect right now is Rare?s 360 launch offering Kameo, though of course Fable 2, a Sudeki update, Mistwalker?s looming RPG exclusive and even a possible Mana game have all been mooted. Time will tell?

Also of interest in the new snap is the way the content is displayed in the silhouette of the letter I. What this means has seen SPOnG?s collective genius stretched to breaking point today. Hit the forum to see a Jabber conversation about this, and marvel about how it went completely off the rails.

UKduffs 28 Apr 2005 15:11
1/8
I know its a low res image and its still work in progress, but I expect a lot better than this. Having seen the Madden and PGR360 screens, this is pretty poor in comparison. Lets hope things buck up in the next couple of months.

So we have either:

Elysium 29 Apr 2005 04:08
4/8
Could be Elder Scrolls: Oblivion. The elder scrolls series are the best non-MMO RPG's on any system, so MS could do worse than having oblivion as a lauch title, or even near launch title. Really, i'm amazed sometimes by console gamers' ideas of what an RPG is. Most console "RPG's" are what I would call adventure games.

If I spent all that time decoding that s**t I'd want the Holy Grail, not fscking "Next Gen".

UKduffs wrote:
I know its a low res image and its still work in progress, but I expect a lot better than this. Having seen the Madden and PGR360 screens, this is pretty poor in comparison. Lets hope things buck up in the next couple of months.

The Glitz 29 Apr 2005 12:50
7/8
You guys all seem to be like arg that screen is crap but what are u basing it on? That Madden pic a while back? NEWS FLASH THAT PIC AINT IN GAME FOOTAGE ITS JUST CRAPPY CUTSCENE

The truth is this new xbox pic is probably quite accurate to what ur gona get. I mean look at the individually rendered grass and flowers. Top stuff, There comes a time when technology alone will not make consoles better. So better graphics dont mean alot, The shot is not a large improvement over the old Xbox graphics because the industry is reaching its limits for power processing and rendering.

maybe Nintendo have got something right for once by going to try and innovate games rather than repeat them. The prospect of sequel after sequel just makes me want to not bother and stick with my good old fashioned newspaper (Halo 3, Sudeki 2, PGR 2....BORING give us some new games.)