It?s that time of year again? 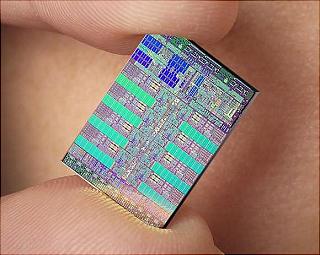 A Cell processor, yesterday
As the run up to what has to be the most important E3 in history looms, speculation is rampant in the press as to what to expect in the long, long wait to see three major home console platforms unveiled.

The latest claims that the PlayStation 3 will be shown before the Electronics Entertainment Expo in Los Angeles, with Sony looking to trump Microsoft and Nintendo.

Seemingly stemming from a report on GameSpot in the US, it would appear that Sony officials have been stating their intentions to make the first move in a generation that looks destined to see at least one casualty.

The news follows recent unveiling of the Cell processor that will eventually power the new Sony machine, albeit a year behind schedule. Read SPOnG?s full report here.

However, it?s likely that there has been a certain level of miscommunication in the emergence of these latest PlayStation 3 reports. As you may know, Sony, Nintendo and Microsoft all hold major off-site pre-show media briefings at which they make their big announcements. SPOnG believes that Sony will merely be showing the PS3 a few days before the conference commences, as will Microsoft and Nintendo.

Of course, if a major SCEI announcement or conference hits the radar before that, you?ll be the first to know.

You boy, LUPOS! You are to stay behind at the end of lessons and correct your spelling mistakes.

Or you will be forced to play every Army Men game ever created through to completion.