Either that or a crushing disappointment ? such is life? 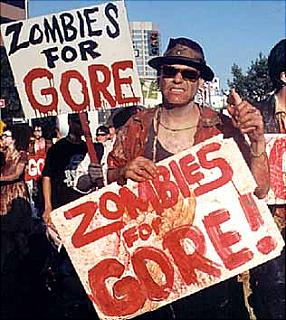 Some zombies campaigning for better horror games last week
Hip Games has announced part of its perceived future of ?The George A. Romero Game? revealing that Kuju Entertainment has been signed as development partner for the ?announced too soon? unknown horror title.

The game doen?t yet have a title or, well anything else really, though it does have a corporate press statement. Yes!

"With George A. Romero's cult status and following among horror fans, a property of this pedigree deserves a first class developer. That is exactly what horror fans will get now that we've signed high profile developer Kuju Entertainment," said Arindra Singh, president and chief executive officer of Hip Interactive Corp.

Expect some meat on the bones at this May?s Electronic Entertainment Expo, beamed direct to your screens from sunny Los Angeles.
Companies: Hip Games Kuju