Myst V: End of Ages brings the series to a close. 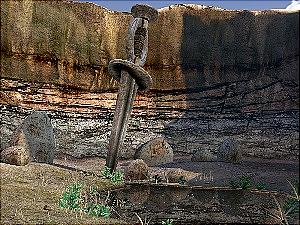 Ubisoft has announced that the fifth instalment of Myst will be the last. Due later this year, Myst V: End of Ages picks up where the original Myst ended. Maybe some hardcore Myst-ite (?) reading this can explain why the game isn't going to go on - logically in our estimation - from where Myst IV: Revelation left off. Whatever, fans of Cyan Worlds' previous efforts should lap this up, as it promises a more immersive and involving storyline than ever before. Plus there's the added incentive of the game coming to a proper conclusion. Someone at Cyan Worlds must be as sick with sequel-itis as we are.

"Myst is more than a game, it's an experience, and in many cases, a lifestyle," said Laurent Detoc, president of Ubisoft's North American division. "Cyan Worlds will deliver the final chapter in what has been a phenomenal run of success, both critically and commercially. We know that Myst V: End of Ages is something people will want to be a part of, something memorable that will resound with players for a lifetime."

"Myst V: End of Ages follows the Myst storyline to its conclusion - closing the book on the Ages of Myst," said Rand Miller, CEO of Cyan Worlds. "To complete this circle of Myst we've embraced the idea of something old and something new. New in regard to pushing forward in areas of interface and technology. And old - getting back to the simple exploration that made Myst so magical."