And big angry monsters to boot 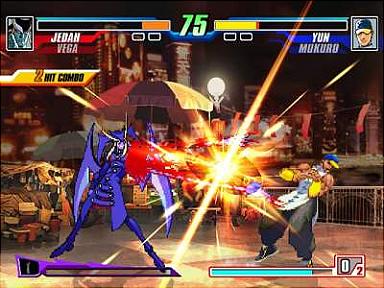 All Images (11) »
Capcom Japan has released the latest batch of screens from the rather interesting 2D brawler Capcom Fighting Jam, or Capcom Fighting Evolution, depending on which part of our doomed planet you reside.

The game has seen something of a thorny reaction from the hardcore community since it was unveiled and has something of an interesting history. You see, this replaces the doomed and subsequently abandoned Capcom Fighting All-Stars, the System 246 and PlayStation 2 3D revival as planned by Capcom.

That project was abandoned following disastrous field tests and sent back to the drawing board. Capcom, using it’s infinite vat of innovation, decided to make a 2D fighter based around the concept of a cabinet full of characters from various Capcom games.

No specific date for the European roll-out as yet, though importers should check the usual places right now for the US version and in early December for the Japanese game. Available for both Xbox and PlayStation 2, an enhanced version featuring Live support will hit in March of next year.

President Weasel 17 Nov 2004 17:04
1/4
The European release is currently scheduled for the 11th of February for the PS2 version, according to the Capcom Europe forum.

These are the kind of games that should be online, so you can play for 15 mins or an hour with decent speed. Xbox folk are lucky.

Autobot 17 Nov 2004 19:02
3/4
I love Capcom with every inch of my gaming heart, but there is one thing that is making me furious. I have spent close to 200+ dollars on Capcom based 2d fighters and have only seen a few redesigns of characters. I swear how long do I have to see Ryu stand on a winning pose and raise his fist in the air. Cammy has shown the same butt on her winning pose for far too long. I think they NEED to redraw many, if not all the characters in there games. Its not fair to keep paying for the same game with only a few tweaks. I wouldn't mind paying 20 bucks for a rehash of a game but 50 dollars is too much. Guilty Gear X# was a breath of freash air to me when I bought it at 20 dollars and it in many ways surpassed Capcom in both style and gameplay. I know Sammy does the Capcom thing of rehasing the same game over and over but at the 20 dollars I thought it was a tremendous deal.

Now, I will shut up

nickeedoo 18 Nov 2004 14:11
4/4
I'm looking forward to this game. I've not looked forward to a Capcom beat 'em up - no, a Capcom game since Marvel vs Capcom 2 on the Dreamcast.
Posting of new comments is now locked for this page.