Guilty Gear Isuka Goes Live on Xbox in Japan Only? 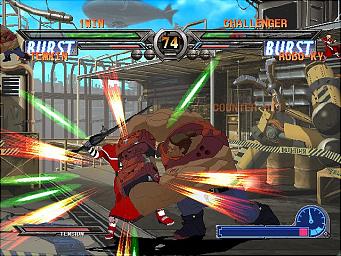 All Images (3) »
Arc System Works, in conjunction with Sammy Studios, has announced today that an Xbox version of Guilty Gear Isuka is on the way. At first there appears to be nothing inherently unusual about that - the PS2 version of Isuka proved popular enough, and the 2D beat-em-up genre is hardly a saturated market on the Microsoft console. However, what is a bit peculiar is that only a Japanese release has been announced so far.

There simply aren’t many Xbox owners in Japan, and so there can’t really be much profit for the taking. The PS2 version of Isuka was received well by fans, and the game will be making its North American debut later in the autumn for the Sony console. There’s been no mention of the Xbox version however, which is a shame, as Live-enabled online play has been confirmed for the Japanese title, and the PS2 version is a strictly offline affair.

Japanese Xbox owners are sure to snap up Isuka when it’s released on December 16, as the Sammy scrapper has earned itself a loyal following, with Guilty Gear soundtrack CDs and bubblegum toys widely available across the country. With its high-resolution 2D graphics and simultaneous four-player Battle Royal mode, many fans have heralded Isuka as a highlight in the series.

Although the Xbox prequel - Guilty Gear X2 Reload - has only recently been released in the US, we can only assume that Isuka will eventually make its way stateside, and hopefully Europe-wards too. A Japan only release of Guilty Gear Isuka would effectively mean the online play mode would be near redundant as there would only be a handful of people with playable copies. That would be a shame for all concerned.
Companies: Arc System Works Sammy
Games: Guilty Gear X2 Reload

Joji 25 Aug 2004 12:05
1/1
Xbox impact in japan still suffering, MS gonna have it tough again with Xbox 2. They should possibly reconsider releasing it in japan perhaps, even though I know they won't actually do it.

Guilty Gear is a good series and online play makes the package even sweeter, guess we'll have to wait on the euro and u.s release to get more people online.

Other funny yet ironic icing on the cake is that despite MS Xbox debacle in japan, Apple's iPod seems to be shooting off the shelves and having people waiting around the block like it was a new console launch. And even though there's no japanese iTunes site up yet. Bizarre.