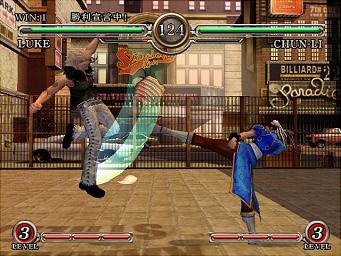 Fighting All Stars arcade screens
All Images (3) »
After the "will it, won't it?" debacle surrounding "Capcom Fighting All-Stars" (which was concluded by "it won't", in case you didn't know) Capcom has revealed that it do have a new fighting game on the way after all. As Capcom is prone to doing, it will draw reference from various corners of its existing catalogue in creating "Capcom Fighting Jam". So the characters on the select screen will consist of veterans from Street Fighter II, Street Fighter III, Street Fighter Alpha, Darkstalkers and Red Earth. The player can mix-and-match these characters and then embark on some 2-on-2 two-dimensional scrapping.

Fighting Jam is penned for a pre-Christmas 2004 release in North America (only on PS2) and will hopefully make the trans-atlantic transition not too long after. In the meantime, expect SNK to announce "SNK Pugilistic Marmalade" for the über-hardcore NeoGeo heads.

robojimbo 16 May 2004 07:19
2/3
Leave it Capcom to come up with another 2D fighter that doesn't require that they draw new sprites. Get with the program, Capcom and put those talented artists back to work for crying out loud.

I guess you deserve some respect for having the balls to put 6 year-old Darkstalkers sprites in a game you're trying to pass off as "new."

Joji 16 May 2004 12:37
3/3
It's true that Darkstalkers characters look really dated, by Capcom's 2d animation standards, next to those of say 3rd Strike. It's also clear that their artists are talented enough to put some new characters in game. The 2d competition from Sammy's Guilty Gear series is inspiring, can only help them get better.

It's cool that the 2d fighter is still alive and kickin, after so many 3d fighters have been out. I'm hoping we'll see more of those Capcom classics on PSP/DS, since hand helds are perfect this sort of quick fix gaming.