From Chernobyl to Bikini Bottom... 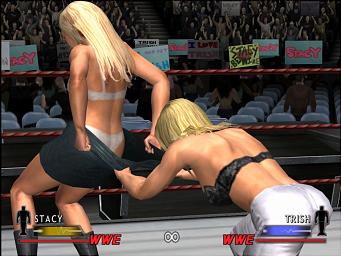 WWE: Day of Reckoning
All Images (4) »
True to form, THQ will be dishing up a kiddie-friendly menu, consisting largely of franchised TV and movie licenses. As such, it is difficult to assess how successful these games might be: faithfully adapted characters and environments will be more important to the little 'uns than the more hardcore values of older gamers. This isn't to say that THQ won't be showing more 'mature' titles: Destroy All Humans and Full Spectrum will both warrant close inspection, and the fantastic-looking STALKER is causing quite a stir amongst the FPS community.

Destroy All Humans
This isn't a President Bush simulator, but something far less sinister. DAH offers a GTA-style open environment, following the exploits of an adventurous alien. Instead of car-jacking passing motorists, this ET will have the ability to 'possess' passers-by for its own purposes. This could be something rather special.

Full Spectrum Warrior
FSW is a squad-based RTS commissioned by the US army. Given the current political climate, that does seem a bit tasteless. Ah well, it could still be a good game.


STALKER: Shadow of Chernobyl
Without a doubt one of the most eagerly-awaited titles from 2004, STALKER is looking like it could well be set to revolutionise the FPS genre. Set following a fictional second Chernobyl 'incident', the game sees you explore 30 virtual square kilometres of the recreated town of Pripyat, which has been abandoned since the disaster of '86. You assume the role of one of the many 'stalkers', as you roam the exclusion zone, on the hunt for 'artefacts' that grant special abilities and powers. With incredibly high attention to detail, a touted completely non-linear structure, and some of the best texture work yet seen on the PC, STALKER looks like it could well give Half Life 2 a run for its money.


Nicktoons
Squarebob with those square pants, Jimmy Neutron et al in all their digitised glory.


Tak 2: The Staff Of Dreams
No, this isn't referring to the lovely staffie who toils and sweats to provide SPOnG with all this magnificent E3 coverage, it's referring to a big stick that a chap called Tak dreams about, twice.


The Incredibles
Based upon a CGI superhero movie, this is a perfectly credible concept.


The Polar Express
Based upon a CGI movie about a small boy on a cold train, this is a fairly incredible concept.


The Punisher
The Punisher has got to be THQ's most hardcore asset. His superhero suit is black with a skull on it and he carries big guns. That definitely summons up notions of some good old fashioned video-game ultra-violence. Marvellous.


The Spongebob Square Pants Movie
The game of the movie of the same name. Presumably the film will actually be a feature length animation, rather than a 'live action feature'. The casting director would have had a nightmarish time looking for a big, spongy, rectangular, yellow actor (because Pat Butcher is still tied to her Eastenders contract)


WWE Day Of Reckoning
At the end of the day, we reckon this will be much like previous WWE games, only newer. Wrestling fans that don't already own a shelf's worth of similar games might be intrigued - nobody else will.