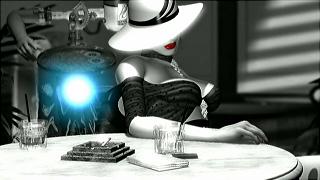 Film Noir
All Images (50) »
At the Games Developers Conference in San Jose, Microsoft has shown its next-generation plans for the first time, with three technical demos showing off XNA - standing for Cross-Platform, Next-Generation Architecture. The platform is being used to develop Xbox 2 games, as well as next-gen games for Windows and other MS mobile devices.

Microsoft representatives on the showfloor stated that the demos, entitled Xenomorph, Crash Test and Film Noir, are essentially from Xbox 2 code routines, showing the standard of graphical output the machine will be capable of when it launches, perhaps as early as late 2005.

The XNA was described as "...the catalyst for a new ecosystem of interchangeable software tools that liberates developers from spending too much time writing overly-mundane, repetitive boilerplate code." Strong claims indeed.

Introduced on stage by Microsoft head man Robbie Bach, the first rolling footage to be shown was Crash Test, a stylish car crash damage routine simulator. Crash Test, developed by Cel Damage creator Pseudo Interactive, was in place to demonstrate the real-time physics computing available to the XNA and thus the Xbox 2, with screens showing telemetric data from the car and environmental information throughout.

J Allard, Xbox bigwig, commented, "The heart of XNA is choice. No games today are built with just one tool, and no games tomorrow will be. By creating an environment wherein software innovations flourish and work together, XNA will allow game developers to redefine what is possible in games while giving gamers the freedom to pursue their own paths. XNA closes the gap between what gamers want and what developers dream about."

Developed by Microsoft's Advanced Technology Group, Film Noir is another stylish medium to demonstrate various graphical tricks, depicting a 1920's-style smoking lady, sitting at a table, the surroundings awash with art deco trimmings. Film Noir, according to Microsoft, was shown to demonstrate advanced lighting and fogging effects as well as chronicle the intricate level of environmental detail that will be gracing videogames come the next phase.

The final clip to be revealed was entitled Xenomorph, developed by High Voltage of Hunter: The Reckoning fame, and the team currently charged with the revitalisation of Leisure Suit Larry. It detailed a creature evolving from a gorilla, into an insect, to a lizard, into, well, just have a look at the screenshots...

Far from being shown to demonstrate the XNA?s morphing capabilities (which are just so-o-o-o nineties, darling) the footage was to show "...imaginative and intricately detailed characters are possible on the new technology."

Speaking on XNA, leader of the gang Bill Gates - fresh from a massive dressing down at the EU which fined the software giant the equivalent of 1% of its entire cash reserves for what amounts to bullying - said, "Software will be the single most important force in digital entertainment over the next decade. XNA underscores Microsoft's commitment to the game industry and our desire to work with partners to take the industry to the next level."

config 25 Mar 2004 12:04
1/13
Looks like the flyer was an indication of the level of quality we can expect from XB2.
The fur on those beasties is just lush, but it has been done before (StarFox Adventures on GameCube)
Nice bloom in the noir demo - and bouncy boobies.

Last, but certainly not least in my book, the deformation on the crash test is just fabulous.

Still, these are only tech demo(n)s, and we've been stung by supposedly realistic physics, lighting and bazillion polys before.

Let's wait for the first batch of games before soiling ourselves, shall we?

M$ is going to have to do _much_ better than that to get my cash.

Jay 25 Mar 2004 14:08
3/13
Why would you be impressed? They're only screens. It's clear in the story that each of the demos showcases technology that's only likely to be appreciated by seeing the full movies.

If the Film Noir demo is fully animated, running in real-time and not beating every last breath out of the host hardware then it would be very impressive.

Thing is, they're only tech demos anyway. Name one such instance that's ever bore even a passing resemblance to subsequent games in the past.

Given enough time, a clever routine and lots of disk space and memory a C-64 could render those scenes.

The question is if the X-Box2 can render those scenes in 1/30 or 1/60 of a second, while I make noir lady dance with a big fat controller.

>The question is if the X-Box2 can render those
>scenes in 1/30 or 1/60 of a second, while I make
>noir lady dance with a big fat controller.

Let me get this right... You want the point boobed chick from the Noir demo to do the tango with the cartoon character who was in charge of locomotive operations in the Thomas the Tank Engine series?

Dude, you are warped!

>With each new generation, the graphics leap gets
>less and less impressive...

that's because they can only go so far, your eyes can only handle so much. take that however you want but it's going to happen, they'll reach a point where the graphics look just like real life and where do you go from there no where.

>With each new generation, the graphics leap gets
>less and less impressive...

Indeed it does, but there are many things that could be worked on that would move graphics further towards the holy "photorealistic".

Bloom is the current darling of graphics coders, and still they're not doing a very good job of it. My fave of the bunch is Burnout 2!

Self shadowing is beginning to turn up in PC games.

Radiousity greatly enhances realism, but it's so subtle most people wouldn't appreciate it - plus it's very processor intensive.

Environmental reflections is be seen in many Xbox titles, but looks so bad I believe they would be better sticking with a fake cubic map that at least animates well.

Depth of field has been done, and in some cases very well, but it tends to get left the cut scenes and rarely used in-game

Motion blur has, again, been done, but rarely to great effect.

Specular Fresnel shading works much better on cars and the like than the out-of-the-box specularity.

Volumentric lighting from realistic volumetric shadows, which leads me to volumetric fog.

Better shaders to mimic the multi-layered, translucent nature of skin, eyes, pearlescent paint, etc. Can be done with latest video cards and their shader languages.

They're only the obvious ones that come to mind, and they don't include the physics side of things, which are essential for realistic movement.

Of course, at the end of the day, if the coders con't get the lighting correct, you might as well go home. Just looks at the gaudy, over bright, flat lit Sega titles. Ick.

>Motion blur has, again, been done, but
>rarely to great effect.

And nor shoud it be.

Motion blur exists to create the impression of motion in still images. Moving images will never look realistic if they have to rely on motion blur.

Real life has no motion blur. It's a crutch computer imagery requires to accomodate the fact that it can only display 30/60/n-ty frames per second.

Motion blur may disguise the frame judder of fast movement, but it will only subliminaly re-inforce the artifice of what is being observed.

Joji 27 Mar 2004 22:45
11/13
Nice, but just another bells and whistles show. We all know that whatever comes next will look better than the previous consoles stuff. It's called progress. Pehaps when this type of stuff is playable we might be impressed, a little if not more.

Alan is my first name 28 Mar 2004 00:18
12/13
My point wasn't to just bach a bunch of test shots, but simply stating that graphics are getting to the point where they are no longer an issue. It's up to the developers now. Now, updating sports games and movie licensed games are all fine and dandy right now, but pretty soon we're going to need pure talent to carry the game industry.

Speaking of fully animated, you can download these as movies at www.microsoft.com/xna
Admittedly they aren't too impressive, but they're still good.
Posting of new comments is now locked for this page.