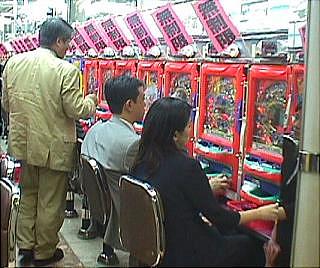 Pachinko!
Regular readers will have followed Sega?s plight with great interest of late and today our worst fears have been confirmed. Sammy, the pachinko giant that recently acquired almost a quarter of Sega, has appointed its own CEO Hajime Satomi as chairman of Sega.

Back on December 19th last year, we obtained a leaked document from Sega Japan that told us Sammy?s Managing Amusement Sales and Marketing Division/Senior Division Manager Yoshiharu Suzuki would be taking over as head of Sega?s arcade division.

The memo mentioned that other changes, at the highest level of Sega, would be proposed, but no one expected this. The news is compounded by the revelation that popular chairman Hideki Sato has been demoted to vice chairman - a humiliating blow for the long-time Sega stalwart.

And the story goes even deeper than this. Although Sega?s current president, Hisao Oguchi will remain the figurehead of Sega, he now has effectively no power over operating decisions except in an advisory capacity. This is due to Sega?s shareholders passing a representative rights management structure proposition (a proposition made by Sammy), which means that whoever owns the most stock in Sega sways any decision making process. And that person is Hajime Satomi.

This will now open the floodgates for Satomi?s plans of third-world arcade dominance, a plan he has failed to keep under wraps in any way. Utilising the Dreamcast-based AtomisWave arcade platform, Satomi plans a full-scale rollout of gaming machines into China, Russia, Africa and South America, amongst other regions. A massive undertaking that is likely to shift Sega?s core focus away from the coalface of video games progression.

And there?s more. Back in December, Satomi told Reuters in an interview that Sammy was looking into a number of options for Sega, including setting up a holding company or even a full merger attempt, but that he needed to get on the board before any such plan could come to fruition.

Satomi, a famously outspoken figure in the Japanese coin-op games industry, took a huge gamble with his approach to Sega. As well as announcing an all-new budget games program aimed at developing nations, he made the boldest of statements about any perceived problems in the relationship, even saying, ?I can't imagine that [Sammy and Sega not being able to work together] happening, but if our vision does not agree with that of Sega then we might have to consider taking more shares.? It seems that with today?s appointment, this won?t be necessary.

Sega?s share price rose on the news at close of trading in Japan this morning by 1.91%

However, it?s is worth remembering that Sega is certain to make much more money if it scraps costly videogame development and production and concentrates on a pachinko-driven business model. Although this is of course the primary concern for shareholders, it completely fails to take into consideration the videogames industry and Sega?s huge and loyal fanbase.

Two Sega directors, Masahiro Aozono and Makoto Kaneshiro, resigned their position at today?s meeting as of February 16th this year. No reason was given for either departure.

revisedgenocide 17 Feb 2004 11:50
1/2
:(
Theres not much else to say really. Its a damn shame its come to this. You have to wonder if sega might have been better off if MS had snapped them up.