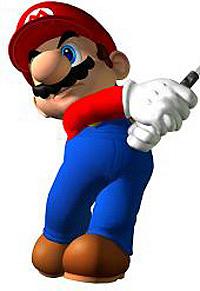 Mario enjoys a round of golf while waiting for Miyamoto to spill the beans
Speaking in Official Nintendo Magazine, Nintendo frontman Shigeru Miyamoto has spoken about Mario 128 and the difficulties he perceives in showing the game to the public.

When asked why the game has been so closely guarded, Miyamoto said, “I'm sorry that I have been unable to talk much about that title. With Mario 128, I have been challenging many unprecedented things, not found in existing video games. These new ideas are prone to lose their freshness or to be imitated once they go public, so we must be extremely careful when we discuss such things. I have been feeling the pressure that I have to complete this project. Would you please be patient?” Again, Nintendo shows its sense of paranoia surrounding its IP.

Speaking of the company’s European plans for this year, he said, “In 2004 you will see a variety of activities regarding the Legend of Zelda. Nintendo of Europe will announce the launch date of the Four Swords game this year, which we have shown at ECTS and E3. The development of the new Wind Waker is under way and we would like to discuss the details in 2004.”