‘The Thing’ revealed as Nintendo faces toughest test to date. 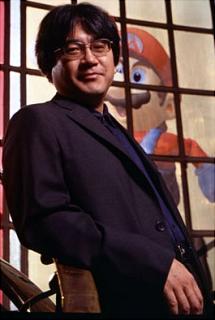 Iwata-san
Nintendo has finally revealed its mystery product at long last, ending rampant speculation as to what it plans on bringing to the console market in the coming years.

In a press release issued at close of business yesterday. US Eastern time, Nintendo describes its new machine as “…an unprecedented approach to video game play. Holding two separate game screens in the palm of your hand hits the scene later this year when Nintendo introduces a new portable game system, code-named Nintendo DS.”

Essentially a portable games machine with a shock USP, the DS has two screens, and, incredibly, two separate processors. We are still reeling from this news and it’s possible ramifications.

First of all, let’s break down the facts and figures:

There will be twin 3” TFT LCD screens of Game Boy Advance SP standard. The screens will be back-lit; the processors are confirmed as an ARM9 main unit, with an ARM7 sub-processor; the DS will be cartridge-based, with semi-conductor memory maxing out at 1 gigabit.

Games will be split into two fields of view, with one screen hosting the main game action and the other managing data and information. Nintendo of Europe confirmed this morning that the screens will be vertically aligned and flush fitting, this layout combining to make one larger screen. No control system was revealed.

As well as first-party software, Nintendo stated that it is already in discussions with third party manufacturers for DS support.

The DS will be available in playable form at this year’s E3 conference in Los Angeles, and the console will be handled as a stand-alone unit and marketed as such. No specific Game Boy or GameCube tie-ins are forecast.

No connectivity functionality, software, pricing or region encoding was announced, and no media capabilities (video/audio playback etc.) were revealed.

The launch date for the Nintendo DS wasn’t announced, though Nintendo committed to getting the machine on the global market before the end of this year.

And that’s about all that is known at this point. The device is likely to take its cue from the recently released iQue, essentially a cut-down Nintendo 64. It’s likely that the DS will share more than a little DNA with the China-only console.

Nintendo president Satoru Iwata, in the DS press release, seems in buoyant mood. “We have developed Nintendo DS based upon a completely different concept from existing game devices in order to provide players with a unique entertainment experience for the 21st century.” However, if the DS becomes the next Virtual Boy, incidentally the last portable Nintendo machine to feature two separate screens, Iwata’s position at the head of Nintendo will by no means be as secure as that of Hiroshi Yamauchi, who dictatorially rode the Virtual Boy storm with consummate ease.

It’s also worth noting that it was Iwata who pioneered the ill-fated Pokemon Mini, a machine whose failure was simply overlooked in the glow of massive global sales elsewhere in the Pokemon range. If the DS does not succeed, Iwata will surely fall on his own sword.

Pricing of the unit and where it fits into today’s portable gaming market is a concern for the DS. For example, current Game Boy Advance hardware sells at around Ł60, with the SP fetching in the region of Ł90. Given that the DS will be a far more complex device than the Game Boy range, it will surely demand a higher retail price.

So, if it’s fair to assume that the Nintendo DS will be positioned at around the Ł150 mark, where does it fit into the portable market as it will stand at the end of 2004?

Given that Sony Europe boss Chris Deering recently said of the company’s upcoming portable - the PSP - that it would be “…closer to Ł200 than Ł300”, can Nintendo seriously consider that the DS is a contender? The extra functionality afforded by the PSP - video playback, audio playback - surely makes it worth the extra Ł50, assuming that the pricing forecasted is accurate.

Then there is the generational gap that Nintendo will have to bridge. And it’s likely that it’s here that the old man of Japanese gaming will find its most testing challenge. The PSP will, as one Sony developer put it, “…be as close in performance to the PlayStation 2 as possible.” The DS is widely expected to perform at around the same level as the Nintendo 64, or perhaps slightly better. Again, the PSP outstrips Nintendo’s machine, this time in terms of core gaming performance. And for a mere Ł50 extra…

Perhaps one senior development source summed up the DS situation perfectly. “If Nintendo had released a portable GameCube, it would have rejuvenated GameCube development in the wider context. This way, the firm is a generation behind Sony, and is split across supporting three separate platforms, and will incur the R&D costs of developing an entirely new machine. It seems like a mistake.”